Greg Olsen has become the veteran leader of the Carolina Panthers as they go after a Super Bowl title this year. (Getty)

Get ready for a brand-new favorite NFL player.

Greg Olsen is a veteran tight end, a consistent presence on offense for the Carolina Panthers. He’s a star, but not in the same sense that Cam Newton is a star. He’s, well, he’s just there. He’s dependable.

And he should be you favorite NFL player.

Because Greg Olsen is more than just an NFL player. He’s a husband and a father who has taken some of the most trying times in his life, his family’s personal tragedies, and turned them into something good. He’s an activist in the truest sense of the word, shining light on the trials his family has faced, on the way they’ve not only battled them, but overcome them.

Now, as Olsen and the Carolina Panthers go after a Super Bowl title, the spotlight is shining brighter than ever on the offensive star and there’s plenty of information to get through. Read on for everything you need to know about the long-time player and his life away from the gridiron:

1. Greg & His Wife Kara Were College Sweethearts at Miami

Olsen and his wife first met when they were both studying at Miami and they’ve faced just about every obstacle life can throw at them together. (Facebook)

Although they didn’t tie the knot until 2009, Olsen an his wife Kara have been together for years. In fact, the pair first met while they were both attending the University of Miami.

After the pair married, Kara started working in the real estate market in Chicago, joining Campins Co. and heading up their expansion in the market. She kept that job when Olsen was traded to North Carolina as well.

Now, with their life firmly set in Carolina, Kara is focused on charity work, serving as a board chair for the Greg Olsen Foundation.

2. The Couple Have Three Children, Including Son T.J. Who Was Born With a Rare Heart Condition

Olsen is very protective of his family and the group has built a life for themselves in North Carolina. (Instagram)

Olsen considers himself a big-time family man off the field, but it hasn’t always been easy for the father of three. In fact, sometimes it’s been a question of life and death.

Just months after Olsen and his wife became first-time parents they discovered they were expecting again, this time twins. While she was still pregnant, Kara and Olsen discovered that one of the twins, T.J., wouldbe born with congenital heart defect called hypoplastic left heart syndrome. In other words, the left side of his heart is severely underdeveloped. Olsen described the moment the doctors delivered the news, telling FOX Sports:

The thought of your child going through that when he hadn’t even been born yet …Then we were going to start down this long road of years of getting through these surgeries. Just the sheer thought of that, listening to the odds and the percentages, how kids’ lives, the spectrum of what the life expectancy is, the quality of life, and the duration of life … It was a day that we’ll never forget.

T.J. has already had four surgeries – three open heart procedures and another to install a pacemaker. The Olsens are hopeful that he’ll be able to spend more time at home now, but nothing is set in stone.

Over the past few years the family has received help and support from nearly everyone, but no one was more ready to assist than Carolina Panthers owner Jerry Richardson, a heart transplant recipient himself. Richardson helped the Olsens get to and from Boston regularly after T.J. was born, giving them use of his plane and joining them in sessions with doctors.

3. Olsen Founded Receptions For Research: The Greg Olsen Foundation in 2009

Greg Olsen – TJ Olsen The HEARTest YARD feature on FOX (LONG VERSION)Jen Hale of the NFL on FOX sits down with Greg and Kara Olsen as they share the amazing story of their 2 year old son TJ. TJ was born with Hypoplastic left heart syndrome and has successfully completed the necessary surgeries to live a healthy happy life. #FOXfeatured Music – Amos Lee "Johnson Blvd"…2014-10-12T21:07:10Z

In 2009, Olsen founded his own charitable organization, first focusing on raising money for cancer research. His mother, Susan, had been diagnosed with breast cancer in September of 2001 and Olsen was determined to do something to help others who were battling the disease.

The Foundation also supports The Heartest Yard, founded after the Olsen family’s medical battles with their son T.J. The program works closely with Levine Children’s Hospital at Carolinas Medical Center to “provide families of babies affected by congenital heart disease with a multitude of services including in-home, private nursing care, physical therapy and speech therapy among other benefits.”

Earlier this year, the Foundation announced that it had raised $650,000 for the Levine Children’s Hospital through donations and fundraising efforts. Now, Olsen and the Foundation are promoting a new fundraiser a “CAROVAN50” t-shirt that depicts the Panthers biggest names on their way to the Super Bowl. 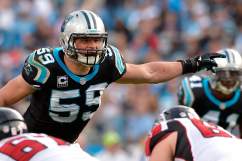 4. The Panthers Signed Olsen to a 3-Year Extension in March 2015

After initially joining the Carolina Panthers in July 2011, Olsen made sure to cement his future with the squad in March 2015, signing his name on a three-year extension.

According to ESPN, the extension was worth $22.5 million and included a $12 million signing bonus with an average annual salary of $7.5 million. Before signing the new deal, which runs through the 2018 season, Olsen had been entering the final year on his original contract with the Panthers and the team had made it a priority to keep him in a Carolina uniform. General manager Dave Gettleman released a statement, saying:

We are very pleased and excited to have Greg on board for the next four years. He is a professional in every sense of the word. Greg’s leadership and work ethic is a great example for our young guys.

Olsen made his first Pro Bowl after the 2014 season, setting a team record for single-season receptions (84) and yards (1,008) by a tight end.

Long before he was a star with the Panthers, Olsen was a freshman in college with friends who liked to pull pranks. (Getty)

In the long history of Miami’s gridiron dominance, the 7th Floor Crew may not be one of the brighter spots. The group, which was made up by several Hurricanes players in the mid 2000s, included Olsen who was known, at the time, as G-Reg.

As the name would suggest, the 7th Floor Crew was made up of Miami football players who all lived on the seventh floor of Mahoney Hall. In addition to Olsen other members included Jon “Big Beast” Beason, Tavares “T-Good” Gooden, and Willie “Dub C” Cooper. Unfortunately, they only made one song.

Olsen discussed his brief musical career shortly after he was drafted by the Chicago Bears in 2007, saying:

It was an immature mistake on my part, and I certainly recognize it was wrong. I am not proud of what we did and have become a more mature person over the past three years.

As far as any reports go, Olsen hasn’t picked up a microphone since those first few days of freshman year.