After eight seasons as one of the NFL's best all-purpose backs, Matt Forte is out in Chicago. The Bears informed Forte they will not be re-signing him in free agency, and now the 30-year old will test the open market for the first time.

Forte was remarkably consistent during his time in Chicago, playing all 16 games in five of his eight seasons. But a contract year was the worst time for him to be sidelined with a knee injury, and by the time he returned from a three-game absence Chicago had fully embraced the committee system. The Bears are moving forward with Jeremy Langford and Ka'Deem Carey, and Forte will be a solid addition to a playoff contender.

Forte, who has only been to the playoffs once in 2010, made a base salary of $7 million last season. If Forte takes a smaller salary, he could find himself making a deep playoff run next year.

At just over 2,000 total carries, Forte is fifth among active NFL running backs. But where Forte really makes an impact is in the passing game, where his 487 catches are 21st among all active players.

With Forte now available, here are five teams where he would be a great addition: (Getty) 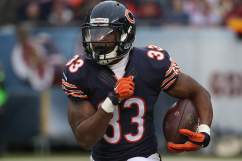 Read More
Chicago Bears, Football, NFL
Matt Forte is hitting the open market for the first time in his career, and he could be a valuable addition to any team.