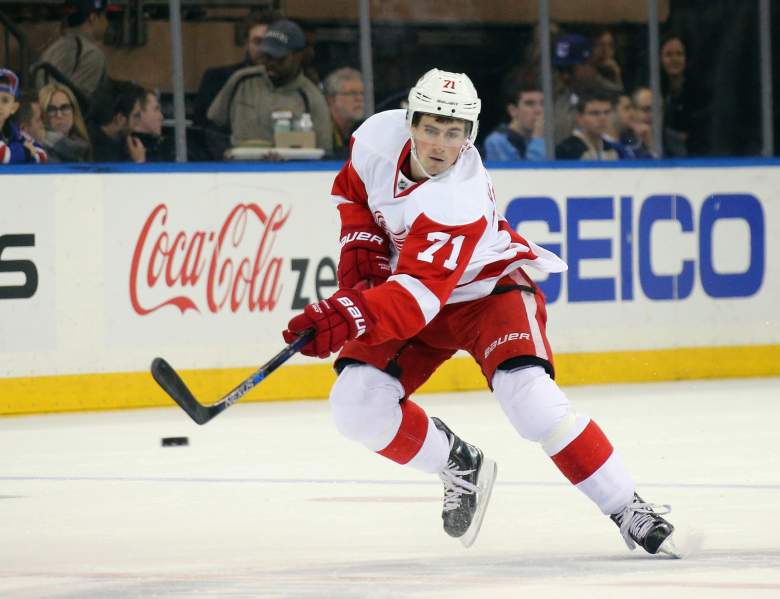 Dylan Larkin could be a difference-maker for the Detroit Red Wings in Saturday’s Stadium Series tilt against the Colorado Avalanche. (Getty)

Hockey is more fun outside, right?

Well maybe not when you’re also outside and watching and freezing cold. Then it’s not that fun. Luckily for all of us, there’s this thing called TV and we can watch hockey outside from the comfort of our very own homes; like on Saturday night.

The Colorado Avalanche and Detroit Red Wings take to the ice at Coors Field in Denver, the latest squads to face off in the NHL Stadium Series. And let’s just say there’s a good amount of history here.

In other words, you’re going to want to check this one out. From inside. Here’s everything you need to know about the game:

It’s 1996. The Colorado Avalanche and Detroit Red Wings are playing hockey. Claude Lemiux hits Kris Draper from behind and, quite suddenly, it’s not just a hockey game anymore. It’s a brawl.

The two teams developed a rivalry from there on out, an animosity that was one of the most emotional matchups in all of sports for years to come. “For me, from the end of ’96 through 2002, in professional sports I don’t think there was anything like it,” Draper told Michigan Live.

Now, the squads square off on Saturday night, looking to rekindle a bit of that emotion in a game that has plenty of meaning on both sides.

Keep an eye out on the Red Wings’ second line – Dylan Larkin centering Gustav Nyquist and Tomas Tatar – which was relatively ineffective in Sunday’s 1-0 OT loss to the New York Rangers. The big question is whether or not Detroit will keep the trio together, giving Larkin a chance to play in-position, or try and jumpstart the offense with yet another move.

If Larkig, however, can get going (back to full after an illness last week), the Red Wings might be able to get some rhythm and steal a victory outside on the road.

Read More
Hockey, NHL
Stadium Series. Stadium. Series. The Detroit Red Wings and Colorado Avalanche are the latest teams to take on the Stadium Series on Saturday night and you're going to want to watch.