Renee Young, who was born in Canada as Renee Paquette, is one of the most recognizable faces in the WWE universe. But while her work life is certainly focused on the world of wrestling, Young has also found a way to bring a bit of that WWE-focus in her personal life as well. After all, she and Dean Ambrose, who is going after the WWE Heavyweight Title against Triple H during Saturday night's 'Roadblock' event, have been dating for years. For real. It's a relationship that both stars have, mostly, kept under the radar, but the support system it's fostered has also been a major part of both Young and Ambrose's career in and out of the ring. While her on-screen persona won't be taking sides during 'Roadblock,' you can bet the Paquette-version of Young is the biggest Ambrose fan in the stands. Click through the gallery to learn more about the announcer, her road to WWE stardom and her relationship with the Lunatic Fringe. (Instagram) 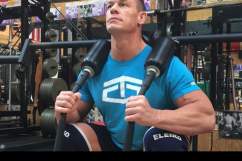 Read More
WWE
They're a match made in WWE heaven. Get to know more about Renee Young, her relationship with Ambrose and her own career in the wrestling world.