Maria Sharapova certainly did make a "major announcement" on Monday afternoon. The Russian tennis star announced that she had failed a drug test at the Australian Open in January and is currently awaiting her penalty from the ITF. Sharapova hasn't actually competed since the Open, when she exited the tournament in the quarterfinals, falling, once again to Serena Williams. The star told reporters that she was taking the drug meldonium for 10 years to address a number of health issues, including everything from irregular EKGs to a possible diabetes diagnosis. "I take great responsibility and professionalism in my career every day. I made a huge mistake," Sharapova said. "I let my fans down. I let my sport down." Sharapova had announced the press conference on Sunday night and the news sparked rumors of her imminent retirement. After all, the star has been battling injuries for years, most recently a left forearm issue that forced her to pull out of the BNP Paribas Open at Indian Wells. However, Sharapova was quick to dismiss the retirement rumors, saying, "If I was going to announce my retirement, it wouldn't be in a downtown Los Angeles hotel with this fairly ugly carpet." As Sharapova and tennis fans around the world wait to her the possible punishment for the test results, click through the gallery to reflect on her impressive career, both on and off the court. (Getty) 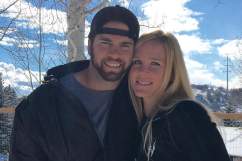 Who Is Holly Holm’s Husband?

Read More
Maria Sharapova, Tennis
The tennis great is set to make 'major announcement' in a press conference on Monday, but before she does take a look back at Sharapova's best moments.