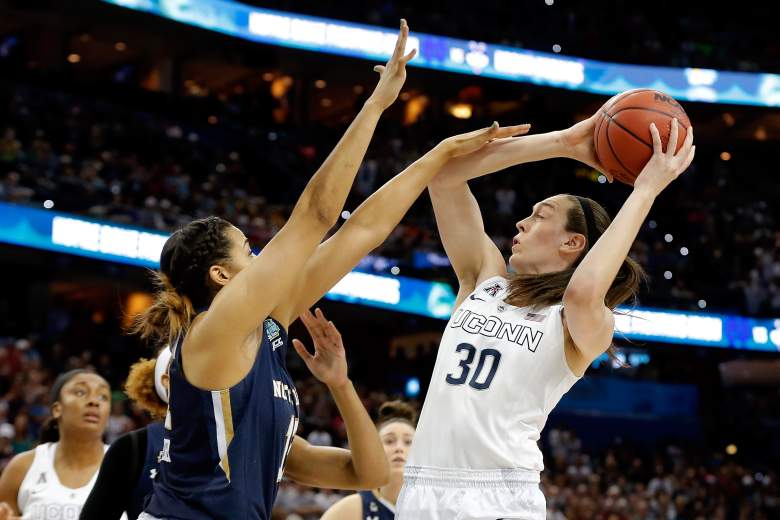 Breanna Stewart is looking to make it four-for-four in conference titles tonight as UConn takes on USF. (Getty)

The UConn women’s basketball team has been seemingly unstoppable all season.

And, well, for several straight seasons.

The Huskies are going for their third straight American Athletic Conference sweep and third straight title since the league was formed. It would also mark the 18th time since 1988-89 that UConn has posted an undefeated regular season and a conference championship.

So, yeah, UConn has been doing ok recently.

But USF is no slouch either. The Bulls are ranked No. 20 in the country for a reason and the possible return of American Freshman of the Year Kitija Laksa tonight could make things just a bit more even.

Read on for all the info on tonight’s championship as well as live stream info in case you aren’t able to watch on TV.

Game Preview: We need to talk about Breanna Stewart.

The UConn senior has led the Huskies to three straight national championships and the run at a final title, at least for her, starts tonight. Don’t underestimate that determination.

Stewart’s best work frequently comes once the calendar turns to March and the star needs just 10 points to join  Kara Wolters and former teammate Kaleena Mosqueda-Lewis as the only Huskies players to record 200 points in conference tournaments. Those 10 points could also tie her with current Connecticut Sun forward Chiney Ogwumike for seventh place in NCAA Division I women’s basketball history with 128 double-digit efforts.

It seems as if Stewart can do it all and that might not actually be an exaggeration. She is, honestly, that good.

She can post up. She can shoot from the outside. She can drive. She doesn’t care if there are four people guarding here at once.

Stewart isn’t going to walk off this court without a fight and it’s, honestly, tough to doubt her.