Abby Wambach was arrested on a DUI charge in Portland, Ore. (Getty)

Abby Wambach was arrested on Saturday night in Portland, Ore. on a DUI charge. The women’s World Cup champion and two-time Olympic gold medalist was pulled over after she ran a red light and failed a field sobriety test.

Wambach, 35, issued a statement on Sunday afternoon via Facebook and explained that she was arrested after having dinner at a friend’s house. She took complete responsibility for her actions and apologized to her friends, family and fans who look to her as a good example.

Wambach cooperated with the Portland police during her arrest for DUI. (Multnomah County Sheriff’s Office)

Police pulled over Wambach at 11:05 p.m. on Saturday, April 2. Driving a 2014 Range Rover, she failed to stop for a red light and when the officer stopped her vehicle, he observed signs that she was under the influence of alcohol.

An officer from the Traffic Division then responded to the scene and administered a field sobriety test, which Wambach failed. Wambach was arrested for Driving Under the Influence of Intoxicants (DUII) – Alcohol.

2. Wambach Was ‘Polite and Cooperative’ During Arrest

Upon her arrest, Wambach was brought to the Central Precinct in downtown Portland for a breath test, which she also failed. She was then booked into the Multnomah County Jail at 2:02 a.m. on Sunday, April 3, but released on her own recognizance after processing.

The Portland Police Bureau reported the retired soccer player was “polite and cooperate” throughout the investigation. The bureau also warned that drivers impaired by alcohol or drugs injure and kill thousands of people every year and encouraged people consuming alcohol or drugs to use taxis, ride-share services or public transportation.

Wambach apologized to fans on her Facebook after her arrest. (Facebook/Abby Wambach)

Wambach issued a statement via Facebook around 2 p.m. EST acknowledging the arrest. She took “full responsibility for her actions and apologized to her friends, family and fans.

I take full responsibility for my actions. This is all on me. I promise that I will do whatever it takes to ensure that my horrible mistake is never repeated. I am so sorry to my family, friends, fans and those that look to follow a better example.

4. Wambach Played Her Final Game for the Women’s U.S. Soccer Team in December

Wambach announced her retirement from soccer in October 2015. She played her final game on Dec. 16 in a friendly versus China in New Orleans. It was the final stop of the 10-game Victory Tour for the U.S. women’s national team to celebrate their 2015 FIFA Women’s World Cup championship.

Over her 14-year international career, Wambach competed in four World Cup tournaments – 2003 in the United States, 2007 in China, 2011 in Germany and 2015 in Canada, which the U.S. team won. She was also on the Olympic gold medal teams that competed at the 2004 games in Athens and 2012 games in London.

Her greatest career stat is the 186 goals she scored, the most in international soccer among men and women. She scored her 100th goal in her hometown of Rochester, N.Y. in a friendly game against Canada. 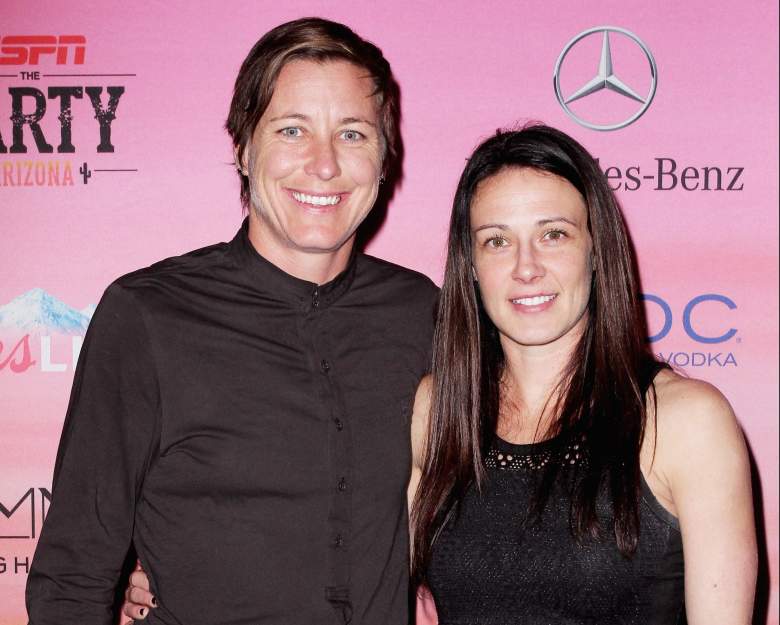 Wambach and Huffman tied the knot in 2013 in a Hawaiian ceremony. (Getty)

Wambach married her longtime partner Sarah Huffman in Hawaii in October 2013. The couple lives together in Portland, Ore. Since retiring, Wambach has had more time to spend at home with her partner and their dogs, she told Out magazine.

We have a house and dogs and stuff. It was more a symbolic thing, but now I’m getting more time at home and can go down that path and get to enjoy all the millions of perks people who are married get to enjoy—the nice things, the bonuses, that come with legal marriage.