30,000 runners will celebrate Patriots Day with one of Boston’s finest traditions: the 120th running of the Boston Marathon. Travelling eight Massachusetts towns over 26 miles is a tough task, but it’s made easier by the thousands of supporters that will line the streets Monday morning.

Starting with only 15 runners in 1897, the marathon is now a staple on Patriots Day, along with an early afternoon Red Sox game at Fenway. Make sure to check out the screaming tunnel of women at Wellesley College, and then check back in at the final stretch to see the runners traverse downtown Boston surrounded by thousands of screaming fans.

Here’s the basic info you need for Sunday:

Where: Runners will start in Hopkinton, and will finish in downtown Boston. Check the full course out here.

How to Watch: Viewers can watch coverage on NBC Sports as well as the ESPN Live Extra App. Users can also track the race on BAA.org. 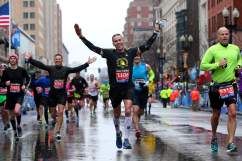