Monday is Patriots Day, and that includes the 120th edition of the Boston Marathon. Some 30,000 entrants will traverse eight Massachusetts towns, with the first set of athletes being released at 8:50 a.m. Eastern and the final wave being released at 11:15.

Starting in Hopkinton and ending in downtown Boston, several famous locations mark the scenic route. The course is known for its constant change in elevation, including a rise known as “Heartbreak Hill.”

In fact, the first mile of the course drops 130 feet in total, as hundreds of runners will travel the rural road accompanied by the cheers of onlookers. After a few miles the participants will be in Ashland, where that race originally began until 1923. Next comes Framhingham, but be careful not to step on the train tracks at the Framingham Train Station. Things are mostly flat through Natick, giving runners a little break from miles 7 through 12.

Then prepare for screaming.

The women of Wellesley College will be waiting at mile 13, and runners have reported hearing their screams from a mile away. The students line along Route 135 with signs and “support” for the runners.

After the screams have faded, you’ll get a steep drop in elevation-over 100 feet in less than a mile. This sets up a brutal final stretch, consisting of hill after hill before the “descent” into Boston. The one labeled “Heartbreak” is in Newton just after mile 20, and is the toughest half-mile in the race.

The next six miles aren’t easy, but they should be packed with fans. Boston College students pack the streets outside of Brookline, and the crowds continue right into Copley Square and the finish line in Boston. 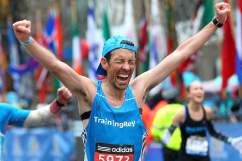