Smylie Kaufman has won over millions of new golf fans in a few short days for his play at the 2016 Masters.

He was in the final pairing of golf’s first major, his first time teeing it up at Augusta National.

But Kaufman has had big fans before he hit the big time. His family has been a source of support, as has his girlfriend, Frances “Francie” Harris.

The two have known each other for years, growing up together in Alabama.

Here’s what you need to know about Harris:

Harris and Kaufman have known each other since they were kids in Alabama.

Both attended Vestavia Hills High School, which is in the suburbs of Birmingham.

VHHS is one of Alabama’s largest high schools and they participate in Class 7A. 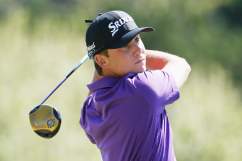 Alabama is SEC Country, without a doubt.

Kaufman followed in his father’s and grandfather’s footsteps and went to LSU to play golf.

Harris stayed a bit closer to home and enrolled at Auburn University, just a couple hours from Vestavia.

Heated rivals are Auburn and LSU, but Smylie and Francie stayed together. 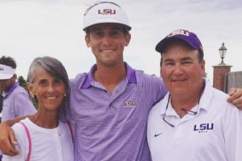 3. Francie Was the Head Cheerleader at AU

While Smylie was on the golf course in Baton Rouge, Francie was also involved in athletics as an Auburn cheerleader.

She cheered for two years then decided she was going to tryout to be the head cheerleader. Harris told family.auburn.edu:

After two years of being on the squad. I felt that I could combine my experience as an Auburn Cheerleader and my past leadership skills to lead the squad during my final year.

She won and jumped right into her new responsibilities by helping to teach AU cheerleader tryout clinics.

Harris’ squad cheered for football, basketball and gymnastics, among other events.

She was also named Miss Homecoming in her senior season.

4. She Is Very Active In Charities & Fundraising

Francie is way more than cheerleading and homecoming.

While at Auburn she was very much into charity work and fundraising.

Raising over $6500 for Open Hands Overflowing Hearts for Pediatric Cancer Research and being named Miss Homecoming were the culmination of an amazing week of memories that I will cherish forever.

Harris would visit and volunteer with sick children who have chronic illnesses during college.

Harris majored in Human Development and Family Studies while at Auburn, earning her degree in May 2015.

For her career, she says she would to be a Child Life Specialist and work in a pediatric hospital.

While Francie works on her career goals, she’ll continue to be one of Smylie Kaufman’s biggest fans.

Read More
5 Fast Facts, Golf, Masters 2016, PGA Tour
Francie Harris is the girlfriend of PGA Tour pro Smylie Kaufman, who was playing in the final pairing on Sunday in his first-ever Masters. Get to know her better here.