With a victory Wednesday night over the Memphis Grizzlies, the Golden State Warriors improved to 73-9 to set a new record for most wins in a single NBA season.

The Warriors, who accomplished the historic feat on the final night of the regular season, passed Michael Jordan‘s 1995-96 Chicago Bulls team, which won 72 games that year.

And now thanks to online sports retailers Fanatics and FansEdge, you can celebrate the amazing record set by Stephen Curry and Co. with brand new Warriors gear catered to the 73-win season.

All of the products on Fanatics and FansEdge are officially licensed and made of high quality materials. And not only do the sites carry new 73-win season Warriors apparel, but also have thousands of other GSW items for men, women and children, including shirts, jerseys, jackets, hats, hoodies and collectible memorabilia.

Here are some of the newest Warriors record-setting season and NBA Playoffs items available right now:

It’s official — the Golden State Warriors are the best the NBA has ever seen in a regular season. Let everyone know you there every win along the way with the Record Breaking 73 Wins T-Shirt by adidas. Made of 100 percent cotton, the royal blue T features the phrase “Golden Season” in screen print graphics.

This shirt comes in a variety of styles. Click here to order the men’s 73 wins shirt in black and go here to buy the women’s shirt.

73. The hat says it all. The Warriors eclipsed the 1995-96 Bulls by one victory for the NBA single-season record. With the Record Breaking Season Snapback Adjustable Hat by adidas, everyone will know you’re a Warriors fan. This style features a high crown, structured fit and flat bill. It is made of 100 percent cotton twill and is one size fits most.

If you’re looking for a different style, click here to buy the Record Breaking Season Adjustable Hat with a curved bill.

It’s a season that will never soon be forgotten. The Warriors got the record — 73 wins. Celebrate with the newest Record Breaking Season Golden Number Pullover Hoodie. Made of 80 percent cotton and 20 percent polyester, the black midweight sweatshirt features a hood with drawstrings and a front pouch pocket. 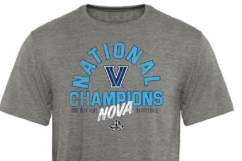 This collectible item is for the ultimate Warriors fan. This Fanatics Authentic indoor/outdoor basketball by Spaulding comes with Stephen Curry’s autograph and has the Warriors 73-9 NBA record inscription. This is a rare collectible as only 73 are available.

When you win 73 games in a season, it goes without saying you’re making the NBA Playoffs and will be doing so as a No. 1 seed. In fact, the defending champions wrapped up a postseason berth over a month ago, but never let off the gas en route to the single-season wins record. Fanatics and FansEdge a number of Warriors playoffs shirts as GSW goes for its second consecutive NBA title.

If you like the shirt pictured above, click here to buy the Warriors Win ’16 T-Shirt. This style comes in royal and also in black. 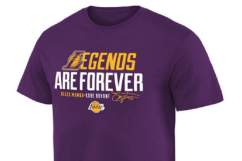