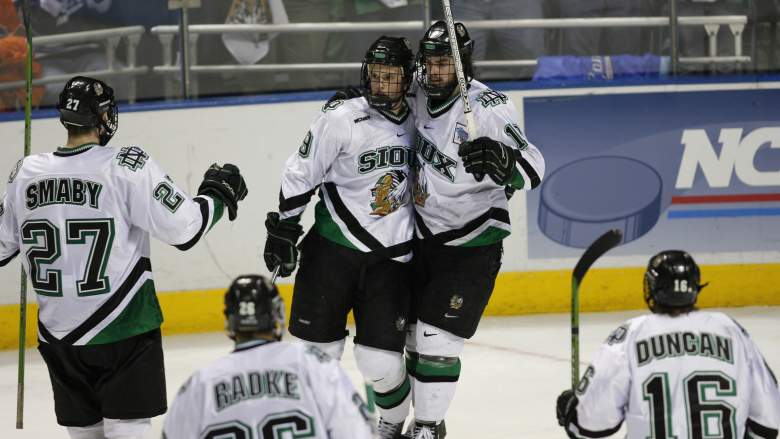 The University of North Dakota men’s hockey team faced off against the Quinnipiac Bobcats for the 2016 NCAA Hockey National Championship on Saturday starting at 8 p.m. Eastern. With a 5-1 victory, the Fighting Hawks brought another championship home to Grand Forks. It marks the eighth championship for the program, joining titles from 1959, 1963, 1980, 1982, 1987, 1997 and 2000. It is one shy of Michigan’s 9-title record.

The first championship in 1959 came in a four-team single-elimination tournament. North Dakota defeated St. Lawrence University in the semifinal and Michigan State in the final, both by a 4-3 margin in overtime, to take home the title. Boston College took third in 1 7-6 double-overtime shootout.

1980 featured five teams, with the Sioux a top seed. Given a first-round bye, the Sioux defeated Dartmouth 4-1 and Northern Michigan 5-2. Dartmouth crushed Cornell 8-4 in the consolation game.

For the second year, 1982 featured an 8-team tournament, with North Dakota a 2-seed. They swept Clarkson 5-1 and 2-1 in a two-game-total-format quarterfinal, then blew through Northeastern 6-2 and Wisconsin 5-2. Northeastern beat New Hampshire 10-4 in the consolation game.

The Sioux returned to a top seed in the 1987 tournament. After 3-1, 6-3 victories over St. Lawrence, the Sioux blew through Harvard and Michigan State by 5-2 scores for the title.

While it was the program’s eighth title, the 2016 championship marked a few notable firsts for North Dakota hockey. After beating Northeastern 6-2, Michigan 5-2, and Denver 4-2, North Dakota left no doubt with a 5-1 victory over Quinnipiac. The championship was the first by a first-year head coach in Brad Berry, who led the team to a 34-6-4 record. It was also the first for the Fighting Hawks, as the University voted to retire the Sioux nickname in late 2015. 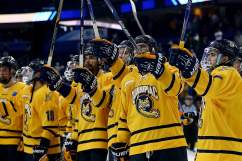 Where Is Quinnipiac University?