Cristiano Ronaldo has a girlfriend, and they’ve been secretly dating for months. Her name is Georgina Rodriguez, and the couple met at a fashion event in Madrid. Knowing that Ronaldo was linked to former Miss Spain Desire Cordero as recently as late October, it hasn’t been a very long relationship. For more about Rodriguez, click here.

Here’s a rundown of his recent dating career, complete with regular updates:

Irina Shayk: Ronaldo and Shayk began dating after meeting at an Armani photoshoot in 2010. The couple dated for five years, but Shayk believed Ronaldo to be cheating on her and ended the relationship. Shayk is now dating Bradley Cooper.

Marisa Mendes: In November 2015, Ronaldo was rumored to have moved on from Shayk. His new lady was Marisa Mendes, daughter of Ronaldo’s agent Marisa Mendes. She accompanied Ronaldo to the premiere of his biopic, and a Portuguese tabloid confirmed that the pair are an item.

Nataly Rincon Rincon popped up in January 2016, when she appeared on Colombian TV to spill the beans about her time with Ronaldo. The pair met in a restuarant, and Ronaldo invited the model to a Christmas Eve dinner. Rincon and Ronaldo haven’t been spotted together since, but Rincon is still playing up the angle on her Instagram feed.

Nikoleta Lozanova In February, news outlets in Bulgaria began reporting that Ronaldo was dating Lozanova, who was named 2006 Playmate of the Year in Bulgaria. The model was also rumored to be involved in Maria Sharapova’s breakup with fellow tennis pro Grigor Dimitrov.

Alejandra Manriquez More recently, Ronaldo has been seen with Mexican pilot Alejandra Manriques. Apparently he has been sneaking off to Morocco together, and Manriquez shared a now-deleted photo of the couple together on Instagram. The only problem? Manriquez is a devout fan of Ronaldo’s rival club, Barcelona.

Kendall Jenner They’ve never actually dated, but it’s been confirmed that Jenner has an open invitation to the Bernabeu to see Madrid play. It made actual headlines in January when Ronaldo liked one of Jenners Instagram photos. Unfortunately for CR7, Jenner is currently dating Jordan Clarkson of the Los Angeles Lakers.

Chloe Green: Heiress and socialite Green went with a friend to see Madrid play Roma in the Champions League quarterfinals, as part of Green’s 25th birthday celebration. Green and Ronaldo have already spent time on holiday in the French Riviera, but that also included Green’s billionaire father and mother.

In addition to these women, Ronaldo has been rumored to date several other models, all with varying degrees of truth. Last year during an appearance on the Jonathan Ross Show, Ronaldo admitted that he was dating several women at once. 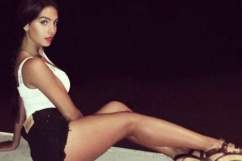