Amore had been part of the WWE main roster for less than a month before his injury on Sunday night. (Instagram)

Things got scary on Sunday night in the opening match of the WWE Payback pay-per-view as Enzo Amore was visibly injured during a move that sent him sailing out of the ring. You can check out the moment here:

This is how the moment looked in real time:

Amore was looked at by medical personnel on the side of the ring while his teammate Colin Cassady and competitors looked on. The WWE replayed the moment several times on the pay-per-view before moving on to promo an upcoming match later on tonight.

It appeared that the move was not practiced as Amore’s opponent – the Vadevillains – initially tried to move him back in to the ring. The referee quickly called the match:

The referee stops the match as medical personnel attend to the injured @WWEAaLLday21. #WWEPayback pic.twitter.com/zLhd5oo9E1

According to the WWE’s announcing team, Amore was taken out of the arena on a stretcher and was taken to a local medical facility in Chicago. He was reportedly moving his extremities and talking.

Amore and Cassady made their WWE main roster debuts in early April, on the RAW directly after WrestleMania. The pair were competing in the No. 1 contender final for the WWE Tag Team Title at Payback. 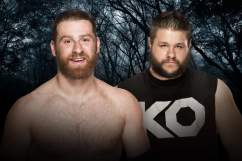 WWE Payback 2016: The Results & Highlights You Need to Know 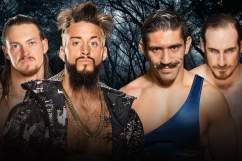