Muhammad Ali, 74, the legendary boxer, has passed away. He leaves behind a large family, including nine children who loved him very much. Ali had four children with his second wife, Khalilah Ali. Together they had: Maryum, Jamillah, Rasheda, and Muhammad Ali, Jr. He then had two children with his third wife, Veronica Porsche. They had Hana and Laila. He adopted one child with his fourth wife, Yolanda Williams: Asaad Amin. He also has two other daughters, Miya and Khaliah, and a possible tenth child who said she used to have a close relationship with him before he came down with Parkinson's. Click through the gallery to see more photos of Ali's children, stories about them, and the tributes they have said about their beloved father. In this photo, from 1978, Muhammad Ali is pictured with his daughters Laila (9 months) and Hana (2years) at Grosvenor House. (Getty) 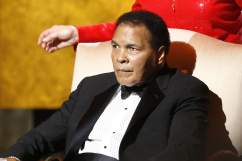 Muhammad Ali Cause of Death: How Did the Legendary Boxer Die?

Muhammad Ali’s Wives: Photos of the Women in His Life

Read More
Breaking News, Muhammad Ali
Muhammad Ali leaves a living legacy in his kids and grandchildren. See all the details about his nine sons and daughters, their photos and tributes.