Argentina are dominating USA in the semifinal, and scored a fully-deserved second goal in the 30th minute thanks to a stroke of brilliance from Lionel Messi.

The Barcelona striker took his time with his free kick attempt, tying his show carefully before lining up his shot. What happened next was pure soccer genius, as Messi put it over Brad Guzan in the opposite corner of the goal.

Messi now has more goals (55) for Argentina than anyone in history. He passes Gabriel Batistuta, who scored 54 times in 78 appearances from 1991-2002.

Argentina added two more goals in the second half to win 4-0. With the win, Argentina advance to their second consecutive Copa America final.

The finals of Copa America Centenario will be held at MetLife Stadium on Sunday, June 26 at 8 p.m. Eastern. The loser will go to the third-place match on Saturday. 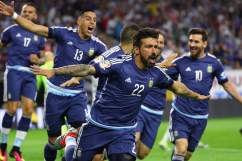