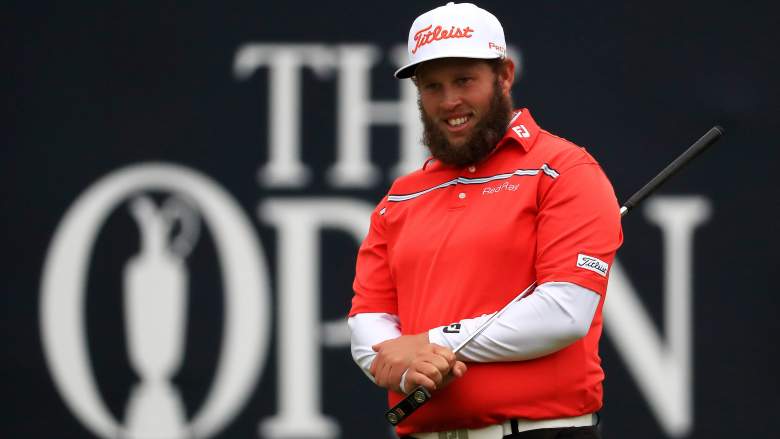 If you have been watching the 145th Open Championship, you’ve probably heard that chant.

The gallery Royal Troon has found a new fan favorite. And his name is Andrew Johnston, affectionately known as “Beef.”

And Beef has responded with his play on the course. The bearded Johnston was in the second-to-last pairing of the Open on Sunday, putting himself in position for a massive payday.

So who is Beef?

Here’s what you need to know about Johnston:

Johnston has had his nickname “Beef” since he was a kid.

The 27-year-old told the story of the nickname’s origin in a press conference early in the week at the Open:

When I was a kid, if I grow my hair out I’m a quarter-Jamaican so it goes curly, and one of my friends said ‘your head looks like a big bit of beef, you’ve got a beefhead.’ And it just stuck, honestly, and now everyone just calls me ‘Beef.’ They shortened it.

The nickname certainly doesn’t bother him as he whoops it up and waves to the crowd as they serenade him with the chant of it.

2. Johnston is from England

At 5-foot-9 and roughly 215 pounds, Beef has always been interested in sports and includes soccer and basketball among his favorites. He is also a big fan of cartoons.

He has his own website redgolf.co.uk where you can catch a glimpse of Johnston and his outgoing and jovial personality.

Johnston is more than just a fan-favorite, but he has some substance on the course.

Since turning pro in 2009, Johnston has 4 career wins.

Beef then joined the Challenge Tour and had two victories in 2014. He won the Scottish Hydro Challenge in June, then topped the field in the Le Vaudreuil Golf Challenge the following month.

Johnston has made over $1.3 million in his career, including over $722K this season.

While a relative unknown, Johnston is climbing the Official World Golf Rankings.

A solid Sunday at Royal Troon will almost certainly see him rise even higher when the new rankings come out after the tournament.

Johnston’s rise in the rankings has been helped by his April victory, his 2016 U.S. Open performance where he finished in a tie for 54th and a T42 in the WGC-Bridgestone Invitational.

5. Johnston Credits his Father for Getting him Into Golf

Johnston said his father, Noel, got him into golf at an early age. An athlete himself, Noel was a constant at Beef’s junior golf events.

But in 2006 when Andrew was just 17, his father suddenly became ill. A series of tests revealed Noel had advanced brain cancer and died about a month later at 56.

I was only 17, and then it was like a bit of, ‘What do you do now?’. Luckily I had the support of everyone, my family and stuff, and they said, ‘Look, just keep playing golf. Keep going, don’t stop.’

Johnston did continue with golf, but hit another rough patch a few years later and contemplated giving up the sport. When he was 21 he interviewed in London and was offered a job.

He needed to make a decision.

It was just in my heart, to carry on playing golf. There’s no better feeling than playing the best events and competing. That’s what I love doing.

It appears Beef made the correct choice.