The Open Championship returns for its 145th year at the historic Royal Troon Golf Club in Scotland.

The championship, which is the oldest major, is held on a different course each year. Of the 14 that have been previous venues, nine are currently used in the rota.

Click through the gallery to see where the British Open will take place over the next four years. (Getty) 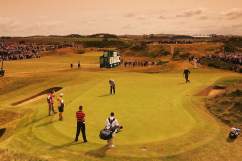 Read More
Golf, Sports
The current British Open rota features nine courses. Here is a break down where the Open will take place over the next four years.