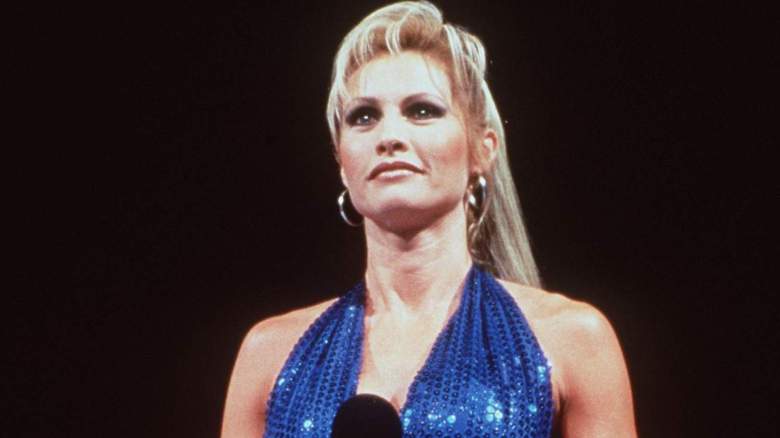 As Brock Lesnar makes his return to MMA for UFC 200, which promises to be one of the biggest events in the company’s history, he’ll have the support of his wife, Rena (née Greek).

Of course, Mrs. Lesnar is better known in the professional wrestling world as Sable, one of the earliest WWE (then-WWF) women’s superstars to enter the squared circle.

Sable, 48 (b: August 8, 1967), made her WWE debut at WrestleMania XII in 1996, when she accompanied a young Triple-H to the ring for his match against the Ultimate Warrior. Quickly rising to become of the most popular stars of her generation, she won the Women’s Championship in 1998.

Upon her departure from the WWE in 1999, she filed a $110 million lawsuit against the company on allegations of sexual harassment. The case was settled outside of court, and Sable made her return to WWE in 2003 for a short stint before leaving on good terms.

In her personal life, Sable married Wayne Richardson in 1986. The couple had a daughter, Maraiah, a couple years before Richardson was killed in a drunk-driving accident in 1991.

She remarried to Marc Mero, a former amateur boxer and professional wrestler with whom she had several stories with during their time with WWE together. After 10 years of marriage, they divorced in 2004.

Sable and Lesnar began dating soon thereafter and were married on May 6, 2006, in Medina, Minnesota. They have two sons together: Turk (b: June 2009) and Duke (b: July 2010). They also have a granddaughter/step-granddaughter, as Sable’s daughter, Maraiah, gave birth to a child in 2012.

When Lesnar isn’t inside the ring or Octagon, the family tends to stay out of the spotlight, as they make home at a farm in Maryfield, Saskatchewan in Canada.

NOTE: Users looking to watch Brock Lesnar vs. Mark Hunt and all of the UFC 200 PPV Saturday can click here to order the event