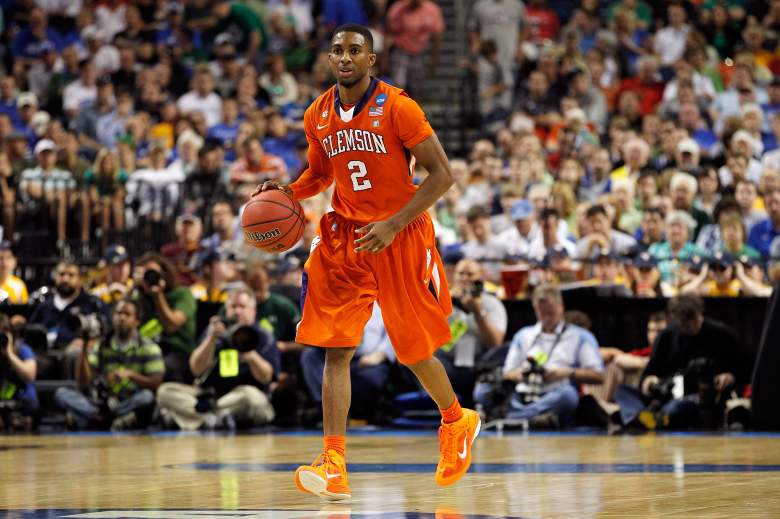 Demontez Stitt, a former Clemson Tigers star, has died. He was only 27. (Getty)

Demontz Stitt was a former Clemson Tigers basketball star who was found dead overnight at his Charlotte, North Carolina home. His cause of death is mysterious, but he was only 27 years old. His death was confirmed by Clemson University.

“With heavy hearts today we mourn the passing of Demontez Stitt, just 27 years old. RIP ‘Buddy,’ you will be missed,” Clemson Basketball tweeted.

Here’s a look at Stitt and what we know about his death. Check back here for further updates.

1. Stitt Was Reportedly Found Dead at his Home

The Israel news site One reported that Stitt was found dead in his home. Nano Press reports that his cause of death might be a heart attack, although that remains unconfirmed.

2. Stitt Is the Only Player to Start on Four Clemson NCAA Tournament Teams

Stitt was a standout at Clemson, notes TigerNet. He played at the university from 2007 to 2011, starting on four NCAA tournament teams. He made the all-time Clemson men’s basketball team in 2011.

The point guard was not drafted by an NBA team. As the Los Angeles Times notes, he had arthroscopic surgery to repair a knee in 2008. Stitt averaged 10.8 points per game.

“My heart aches today,” Clemson head coach Brad Brownell, who coached Stitt during his final year there, said in a statement. “Demontez was a true pleasure to coach. I’ll never forget his big smile and competitive spirit. Clemson basketball extends our condolences to his family during this incredibly difficult time.”

Stitt spent most of his professional career in Israel, but he moved to Turkey for the 2015-2016 season and played for Gediz Üniversitesi Gençlik ve Spor Kulübü. He averaged 19 points, 4.7 rebounds and five assists per game.

4. He Was Released by Maccabi Haifa After a Drug Arrest

We're saddened by the passing of Demontez Stitt (27). We extend our deepest sympathies to his family & friends. #RIP pic.twitter.com/2mzJKzBJqO

YNet News reports that Stitt was released by Maccabi Haifa after he was arrested for drug possession. Stitt was still on the team in 2014, when they traveled to Sacramento to play the Kings in an exhibition game. Stitt had 17 points in the game, but the Maccabi Haifa lost 91-59.

He also played for Hapoel Tel Aviv, which sent condolences to Stitt’s family on Twitter.

we send our deep condolences to demontez stitt's friends and family. our hearts and prayers are with you. R.I.P pic.twitter.com/aJrqnJ7sW6

5. One of His Last Tweets Was ‘Thank you lord!’

Stitt sent out two tweets in the hours before his death. His first message was “Thank you lord!” with three praying emojis. He then wrote “Always room to improve.” He tweeted “Thank you lord” two other times this month.

Members of the Clemson family tweeted their condolences.

Saddened to hear the death of my former tiger brother Demontez Stitt !! Prayers for his family?? https://t.co/Ve7tjh7Yfw

Sad Morning for the Clemson Family! RIP to one of our best PGs ever at CU, Demontez Stitt! My deepest condolences goes out to his family. ?

With heavy hearts today we mourn the passing of Demontez Stitt, just 27 years old. RIP "Buddy," you will be missed. pic.twitter.com/4CfQ046PKV

We lost a special friend, son, teammate, and brother. My thoughts and prayers are with his family.