For the first time in their nation’s history, Portugal are European champions.

After over 100 minutes of scoreless play, Portugal got their result from a tremendous solo effort from Eder. The striker, who came on for Renato Sanchez, blasted a low shot past Lloris with less than ten minutes remaining in extra time.

French fans are familiar with Eder, who plays his club soccer with Lille in Ligue 1.

It was an unexpected start to Euro 2016, as Cristiano Ronaldo exited the match early after suffering a knee injury. Portugal’s leading scorer collided with Frances Dimitri Payet in the early minutes, and was unable to play through the pain. Ronaldo was seen on the sidelines throughout extra time, cheering on his teammates and crying with Eder during the goal celebration.

It’s heartbreak for France, who were on the verge of their third major title on home soil. Elation for Portugal, who played more Euro matches than any other team without winning it all. The hosts had numerous chances in the match, including a Gignac effort that rattled the post shortly before extra time. Their streak of 10 consecutive wins over Portugal is snapped. 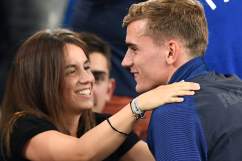 Read More
Euro 2016, Soccer
Eder was the surprise hero of Euro 2016, scoring the winner in extra time to propel Portugal past France.