France may get their spark from the likes of Paul Pogba and Antoine Griezmann, but their rock at the back is what keeps them stable. Keeper and captain Hugo Lloris is the anchor for this French squad heading into their first Euro final since 1998, and Lloris himself would like to add a major trophy to his resume. On the pitch he is a calm and confident leader, but off the pitch he enjoys a quiet life in France with his wife Marine and their two daughters.

Marine may stand with all the other wives of the French national team, but she is accomplished in her own right. Marine has multiple academic degrees, and this month launched a high-end children's clothing line. The line, called Manège en Sucre, is Marine's first small business pursuit as she was motivated by Hugo to follow her dreams.

When the couple aren't conquering sport and fashion, they can be in France with their two daughters. Their first daughter Ana was born in 2010, less than a year after the couple were married. Guiliana followed in 2014, and both will be present at Stade de France to watch their father go for his first major tournament title. 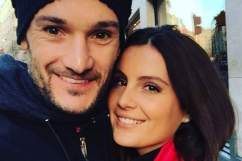 Read More
Euro 2016, Soccer
Check out the best shots of French goalkeeper Hugo Lloris when he's off the clock, hanging with his wife Marine and their two daughters.