Doubles world No. 1 Murray and Soares will face Julien Benneteau and Edouard Roger-Vasselin in the quarterfinals on Wednesday.

Murray is the older brother of Britain's No. 1 singles tennis player Andy Murray, who is the favorite to win his second Wimbledon title. Click through the gallery to see and learn more about Murray. (Getty) 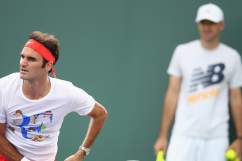