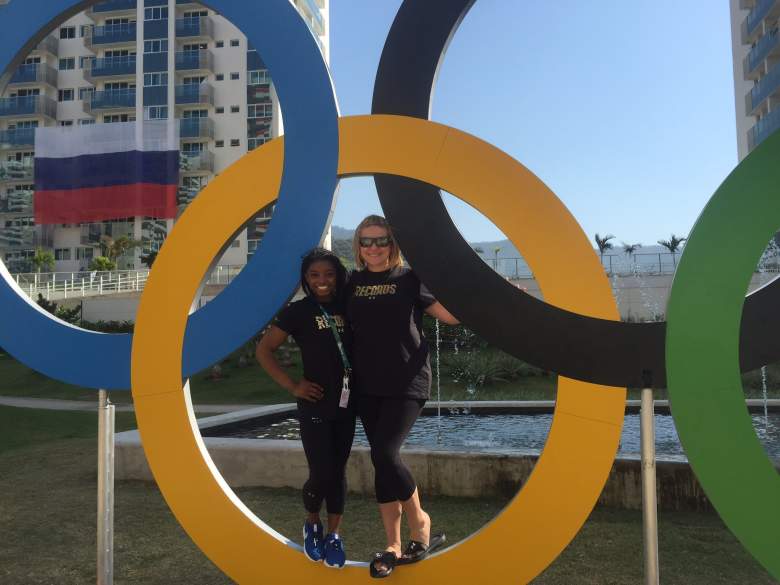 Aimee Boorman has been Simone Biles’ coach from the very beginning of her gymnastics career. (Twitter)

Simone Biles has dominated gymnastics since her senior debut in 2013. She has become known for faultless execution, athleticism and winning confidence. At the World Championships, Biles became the first woman ever to win three straight all-around titles and the first gymnast to capture 10 gold medals.

The 4-foot-9 American gymnast is now on the biggest stage of her career as she competes in her first Olympics in Rio.

Her coach, Aimee Boorman, has been by her side for countless hours of training throughout the years.

Here’s what you need to know about Boorman:

1. She’s Been Biles’ Coach From the Beginning

So…this is for real? I'm Not just dreaming? pic.twitter.com/RDbWDfU6xd

Boorman, 43, has been coaching Biles since 2003, when the gymnast was just six years old.

According to NBC, Biles visited Bannon’s Gymnastix in Houston, Texas for a daycare field trip over 10 years ago. She was mesmerized by the gymnasts, and began her own training. A year later, her talent caught the attention of Boorman, who was coaching there at the time. The two have been working together ever since.

2. Biles Considers Her a ‘Second Mom’

Boorman and Biles share a close relationship. Biles has said she considers her coach as family.

I always say she’s like the second mom to me because she’s been there since I was like 8-year-old, and so that’s the 10 years that she’s always been by my side.

I’m very fortunate to have a coach that I got to stay with all this time. Every year the bond gets stronger and better and we understand each other more. And it’s like she can tell if I walk in the gym what kind of mood I’m in, what she has to fix for the practice I need or how I’m feeling. So it’s really nice to have someone that can just like read me right off the bat when I walk in the gym.

3. Boorman Had Never Coached an Elite Gymnast Before

Thankful for every coach that poured their time into these wonderful athletes.Super thankful these girls never quit! pic.twitter.com/a3PKgd6kOb

Boorman’s coaching experience started at age 13, when she became an assistant coach at the gym where she trained. She began coaching as a way to help pay her gym training bills, according to the Houston Chronicle.

“I said, well, maybe someday I’ll coach an Olympian,” Boorman told the paper. “But I never looked at kids thinking, ‘Is this my Olympian?’ ”

Boorman certainly has her Olympian now.

“It’s her gymnastics,” Boorman told the Houston Chronicle. “She has to perform it, and she has to make the choices to home-school and work the extra hours and do the extra flexibility work. That has been her choice. I’m just her guide.”

Although Boorman had never coached an elite gymnast before, her partnership with Biles has been a success.

“It was a learning process together. So I think that’s what helped us both, because we were kind of both clueless about it,” Biles told NBC. “So we were just learning together.”

Boorman has helped lead Biles to more gold medals than any other woman gymnast in history. Under her coaching, Biles became the first woman to ever win three straight all-around titles and the first gymnast to capture 10 gold medals at the World Championships.

4. She Has Won 2 USOC National Coach of the Year Awards

Podium training, in the books! pic.twitter.com/fftRRLmpGM

As Biles progressed, Boorman told the Houston Chronicle, she had to advance her coaching as well.

“I told (Ron and Nellie Biles, Biles’ parents) that I would let them know when I can’t keep up with her,” Boorman said to the paper. “I was willing to let her go if it would make her better, but I also had a chance to better myself as a coach. I knew emotionally that I was what Simone needed, but I needed to grow technically.”

Boorman became the recipient of the 2013 and 2014 USOC National Coach of the Year Award for Gymnastics.

Biles had a breakthrough year in 2013 when she became the U.S. National Champion, and World All-Around Champion in her senior debut. In 2014, Boorman coached Biles to her second consecutive World All-Around title.

“There are times when she has to push me because I’m not pushing myself enough, but everyone needs someone in their life to do that,” Biles told the Houston Chronicle.

5. Boorman Is a Former Competitive Gymnast

As soon as I saw you, I knew an adventure was going to happen#TeamBiles#TeamBoorman#TeamUSA#TeamΔΦΕ#SimoneBiles pic.twitter.com/cTcgJptnIg

Boorman was a competitive gymnast for 12 years, from age 6 to 18. Boorman told the Houston Chronicle she was 14 years old when she realized she was never going to be an Olympic gymnast. Following high school, she attended the Sports Business Program at Northern Illinois University from 1991 to 1995.

“I don’t think I have an ego as far as coaching goes. You can constantly learns things and be a student of life,” Boorman told the publication. “I love coaching. That is what I do. Gymnastics is my passion.”

Read More
2016 Olympics, 5 Fast Facts
Simone Biles has dominated gymnastics since her senior debut in 2013. Aimee Boorman has been Biles' coach from the beginning. Learn more about her coach and their relationship.