Olympic swimmer Anthony Ervin is most recognizable on the starting blocks by his tattoos. As a fresh-faced 19-year-old, Ervin won gold at the Sydney Olympics in 2000, but just a few years later, he gave up swimming and joined a band.

"When I gave it all up, I went into my chrysalis and did all my partying and self-actualizing in New York,” he told Rolling Stone in 2012. “I'd like to think that I'm emerging now as my moth. And I'm going to fly into the flames."

At 35 years old, Ervin is coming full circle. Having already captured gold in Rio, he will swim in his signature event, the 50-meter freestyle, on Friday.

Click through the photos to see photos of Ervin's tattoos, and learn more about the swimmer's remarkable journey. (Getty) 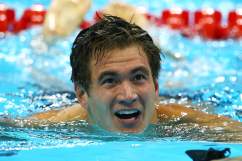 Read More
Rio Olympics 2016, Swimming
Olympic swimmer Anthony Ervin is most recognizable on the starting blocks by his bold tattoos. Click through the gallery to see photos of his ink, and learn more about his journey.