Devon Allen’s sister, Carissa, is a fellow collegiate athlete, who has been by Allen’s side throughout every stage of his life. (Instagram)

Devon Allen finished second in his heat to advance to the semifinals of the men’s 110-meter hurdles at the Rio Olympic games. After waiting out a rain delay, Allen qualified with a time of 13.41 seconds on Monday to earn a spot in tonight’s semifinal event.

The 21-year-old American is a two-sport athlete at the University of Oregon– playing wide receiver on the football team, and competing in track and field.

“It’s my first Olympic Games. I’m a young kid getting ready to run my first race in history. My adrenaline was up there,” he told USA Today.

As he continues his quest for his first Olympic medal, his family will be there cheering him on. Here’s everything you need to know about Allen’s sister, Carissa.

1. She Is Allen’s Fraternal Twin

Oh you know just being the best looking twins out there ?? @dallen13

Allen and Carissa were born in Seattle on December 12, 1994. They were born two months premature and stayed in the hospital for a month due to breathing issues, according to UWire.

However, it didn’t take long for the two to discover their love for sports. Allen began playing football at 10 years old.

“Sometimes we have our parent goggles on and think our kids can do everything, but I’m just speaking the truth,” their father, Louis told UWire.

2. Allen Has Said She Is the Better Athlete

Shoutout to the best brother @dallen13 for always supporting me with all my sports and coming to my game tonight when he could have been doing something else. You're my bestfriend and I love you so much scrubby. Thankful to call you my brother. Photo cred to @vadams_qb

Allen and Carissa always shared a passion for athletics, and a will to win. Throughout their childhood they were multi-sport athletes– playing soccer, baseball and basketball together.

“We always did sports together,” Allen told the website, “and she was always the better athlete.”

Carissa said teammates referred to them as “the twins.”

“It was definitely a really good experience to share with him,” she told Oregon Live. “He helps a lot on the court, and on the soccer field.”

Allen and his sister, who both wear No. 13 for their respective teams, each have a tattoo of its Roman numeral.

In 2016, Carissa played in 18 matches for the Beacons as a junior, collecting 83 kills which ranked fifth on the team.

While attending Central High in Phoenix, she earned all-region honors during all four years, and was an all-state honorable mention as a senior.

4. The Longest They’ve Been Apart Was in College

Double post idc! Words can't describe how proud of am of this guy right here. He's been through so much this past year with his acl injury and he has never given up no matter how hard it has been. I'm so proud of him working hard with rehab and getting out there on the football field doing work! He never complained or anything he just dealt with adversity. I can't wait to see him regain his title this year in the hurdles and see him run in the trials. Bub I'm so proud of you and know you will go so far in life. You're the best brother anyone can have but I'm so blessed that you're mine? love you so much scrubby. Can't wait to see you back in the EUG. @dallen13

The longest Allen and Carissa have ever been apart was during their first two years in college. Carissa was attending Phoenix College, while Allen was at Oregon. Carissa transferred last summer, and now they live a mile apart, according to Oregon Live.

“My two years in Arizona were definitely difficult because I didn’t get to see his games. It was hard, but I’m glad now because I’m so close,” Carissa told the website.

“We always talk to each other, and we can do it over the phone. But it’s different when you see someone’s face,” Allen told Oregon Live.

5. Their Father Said the Family Has Gone Through Difficult Periods

To the best/ coolest dad in the world, You are my role model. One of my favorite men in my life. He is always our biggest supporter no matter what, always cheering us on at any of our activities. Dad, even though we have had some rough times mainly because of me I know you still love me no matter what. I know I have driven you crazy lol but you've never given up on me. You have taught me so much in my life and I'm so grateful that I'm blessed to call you my dad. You manage to still to this day put Devon and I first before your self. I appreciate everything that you do for me and our family. You are the best dad anyone can ask for and I love you so much. I'm going to make you proud. Thank you for everything you've done for us and continue to do for us. Happy Father's Day. I'm sorry we can't be there but we will see you soon. Love you so much ? hope you enjoy your day. @louisallen2

The Allen family motto is “Adversity doesn’t build character, it exposes it,” as their father told USA Today. That character has been tested as the family has experienced a series of challenges in recent years, however Louis says his children have handled it well.

“We as a family – Carissa, Devon and Louis – have gone through some difficult periods in the last six, seven years with my employment, other issues and my children have seen through my example that I never quit, never gave up,” Louis told UWire. “It’s pretty much second nature to them now – they just have that drive, have that passion.”

Tim O’Neil, who coached Allen in high school, spoke about how the family’s values impacted his athletic approach to UWire.

Those values have helped Allen and Carissa to handle the ups and downs of life. Including their parents separation in 2000, and their father’s loss of employment.

“When I couldn’t find a job, food, the lights turned off, gas shut off, me having to ask for welfare, selling almost everything I owned, Devon and Carissa never once complained,” Louis told UWire. “This is why I feel truly blessed.”

Allen’s parents each created their own GoFundMe campaigns to fund trips to Rio de Janeiro. They raised enough money to fund trips for themselves and Carissa. According to Oregon Live, nine members of the Allen family will be there to cheer him on. 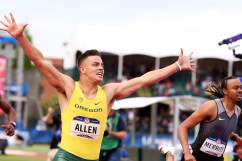 Read More
5 Fast Facts, Rio Olympics 2016, Track & Field
Devon Allen competes in the semifinals of the men's 110-m hurdles tonight. As he continues his quest for a medal, his twin sister Carissa is cheering him on.