Patterson facing off against Brazil. (Getty)

With the start of the 2016 Olympic games today in Rio, one of the sports that can be watched on Day 1 is beach volleyball, which is in preliminary rounds. The women’s and men’s tournaments will each be going on early in the day, but at 3:30 pm EST a men’s match-up involving the US will be taking place. That can be streamed live thanks to NBC. Casey Patterson and Jake Gibb will be representing America against the Cherif/Jefferson from Qatar.

Though Gibb has participated in the Olympics twice before, this will be Casey Patterson’s first ever time playing in the Olympics. It’s been a long time coming for Patterson, 36, as he makes the trip to Rio. An NBC Olympics feature on him says his first professional volleyball match was in 2003. It took 13 years and a new partner to make it to the Olympics, but here he is, looking to impress, surprise, and most importantly, take home the gold for the US.

Patterson and Gibb at the 2016 AVP Cincinnati Open. (Getty)

Though his debut was in 2003, Patterson’s volleyball partnership with Jake Gibb wasn’t to be for another 10 years. Before that, Jake Gibb had been in the 2008 and 2012 Olympics with his then-partner Sean Rosenthal. But afterward, having ended up with a fifth-place finish in both Olympics, Gibb and Rosenthal decided to part ways. Gibb was now looking for a new partner at the same time Patterson was as well. According to the Daily News, a mutual friend of theirs had the two of them over for a barbecue, and the chemistry evolved naturally from there.

The success the duo had was immediate. Their match record in 2013 was 30-5, and the pair won the US Volleyball Beach Team of the Year. They won four gold medals in domestic events with AVP, as well as in Shanghai. That same year he was also voted the FIVB Men’s Beach Volleyball Player of the Year.

2. His Aggressive and Exciting Level of Play Has Given Him the Nickname Mr. Boom

Patterson has earned himself a few nicknames in the volleyball community. One is “The 6’6″ Ninja,” for his exceptional height. Another one that has stuck is “Mr. Boom,” for his larger-than-life persona, one which was quite literally loud. In a piece for The Players’ Tribune, Jake Gibb admitted to having been rubbed the wrong way by Patterson at first, noting the aggressive cockiness he showed at such a young age.

Another thing about Casey: I didn’t really like him at first. Casey’s reputation preceded him. Before we were ever teammates, I knew who he was. He was this young cocky guy making noise at tournaments. He was a great indoor college player who was coming up through the ranks in beach. There was no doubt about his skill level, but he was also known for … how do you put it? Being loud. I mean loud in every sense of the word. Dancing between plays. Talking trash (he’s probably the best trash talker on the AVP Tour). Going right back at hecklers in the crowd. Flaunting that haircut, the yellow Mohawk. He’s a fan favorite, for sure, but if he’s playing against your team, he gets under your skin.

This negative opinion of course did not last, and Gibb and Patterson became a successful team. Patterson still defends his loud, aggressive style of play in that same Tribune piece: “My style is very loud, passionate, in your face. I’d almost describe it as a South American soccer style. I want to show how much I really love volleyball and just let it explode out of me when I’m playing the game.”

3. Patterson is Mormon and Played Volleyball at Brigham Young University

Patterson competing in Beijing in 2011. (Getty)

You might not expect a trash talking beach volleyball player with the styled blonde hair of a surfer to be a member of the Church of Latter-Day Saints. And yet Patterson is, in fact, a devout Mormon. Patterson doesn’t drink, and was a missionary in Little Rock, Arkansas. He has also said that the so-called party vibe of the beach volleyball scene is overstated, making it far easier for someone of Mormon faith to fit in.

After his mission in Arkansas, Patterson attended college, going to Brigham Young University in Utah after a semester at Utah Valley University, on a volleyball scholarship. His height and wingspan quickly made him a star in college. According to his Team USA profile, Patterson majored in recreational management.

4. His Wife, Lexi, is Also a Volleyball Player Who Attended BYU

In addition to playing volleyball, Patterson met a native of Utah while at BYU named Lexi Brown. The two hit it off and were eventually wed in 2005. Lexi was also an impressive college volleyball player, named Academic All-MWC after a senior year that saw her lead the team seven times in hitting percentage.

After college, she and Casey each played in Sweden, according to Deseret News. Patterson then played in Puerto Rico, and after that Lexi retired. As of 2010, she was in the Youth Women, a Mormon organization.

5. Casey and Lexi Have Two Sons, Cash & Guy, and a Daughter, Ray

The reason Lexi retired was to have her first child. That child, Cash, was born in July of 2009. Two years later, their second son, Guy, was born in 2011. Three years after that, in 2014, their daughter Ray was born.

Patterson told The Daily Universe, BYU’s newspaper, that family is his number one priority: “Putting food on the table is number one, so if I don’t win then we don’t eat… A family requires a lot, so you have to take it more serious because that’s four other people depending on you being successful. It’s awesome, because it makes you work harder than you ever would.” 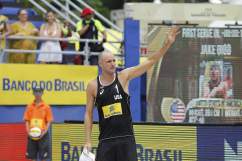 Read More
Beach Volleyball, Rio Olympics 2016
Patterson and his partner Jake Gibb face off against Qatar in a preliminary match today. The two have been a team since 2013.