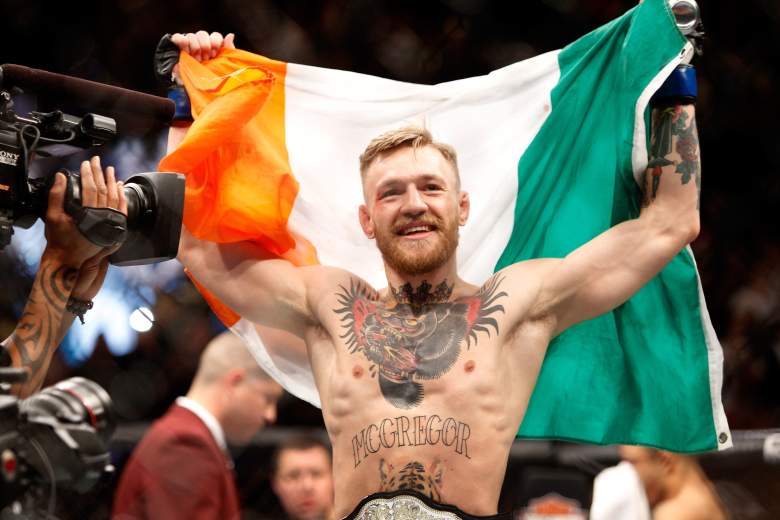 Conor McGregor celebrates after a first-round knockout victory over Jose Aldo in their featherweight title fight during UFC 194. (Getty)

Conor McGregor was once a plumber relying on welfare to get by. Now, he’s ranking on Forbes’ list of highest paid athletes and set to collect somewhere in the range of $100 million for his megafight against Floyd Mayweather on Saturday night.

The 29-year-old Irish mixed martial artist began his professional fighting career in 2008. Since then, he has banked millions. Here’s everything you need to know about his net worth, earnings and endorsements.

1. His Net Worth Is Estimated at $14 Million 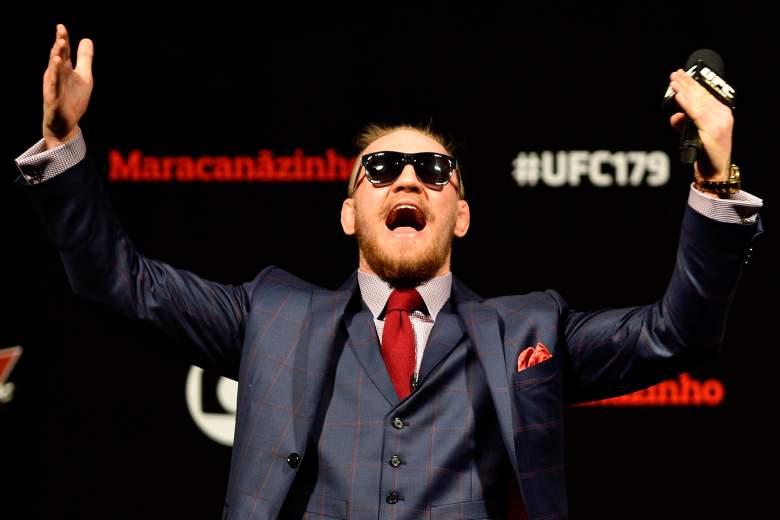 McGregor has a net worth estimated at $14 million, according to Celebrity Net Worth.

McGregor stunned the MMA world on April 19, 2016 when he announced on Twitter that he was “retiring young.”

UFC President Dana White appeared on SportsCenter and explained that the fighter was avoiding his obligations to promote July’s UFC 200.

McGregor later posted a statement on Facebook stating that he was not retiring, but wanted to focus on training for Diaz instead of promoting UFC 200.

He wrote: “I am paid to fight. I am not yet paid to promote. I feel the $400.0 million I have generated for the company in my last three events, all inside eight months, is enough to get me this slight leeway.”

The UFC pulled Nate Diaz vs Conor McGregor from the UFC 200 main event shortly after. 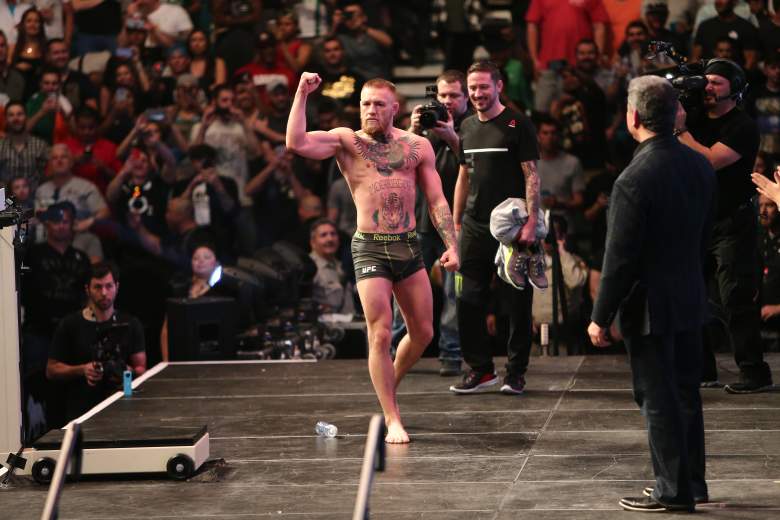 With three fights over the last 12 months, McGregor’s earnings received a significant bump. The 29-year-old headlined two of the three best-selling UFC fights ever on pay-per-view, according to Fortune.

Forbes reports that he has made $18 million in the Octagon. When McGregor knocked out Jose Aldo at UFC 194, he earned an estimated $12 million. It brought in 1.2 million pay-per-view buys, as noted by Forbes.

McGregor became the first UFC fighter to pull in a seven-figure fight purse in March at UFC 196, earning $1,000,000 despite losing to Nate Diaz. Forbes reports the fight pulled in 1.5 million units. McGregor’s cut of PPV revenue helped him bank $18 million.

3. He Makes an Estimated $4 Million From Endorsements 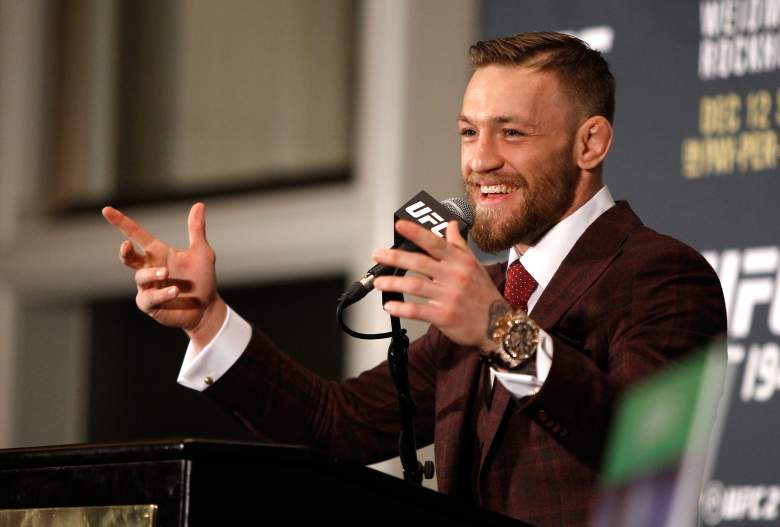 Most recently, Conor McGregor inked an endorsement deal with BSN ahead of his title fight showdown with Jose Aldo at UFC 194.

“I take my nutrition very, very seriously. You can’t cut corners in this game. You must align yourself with the best in each field, and that is what I have done. BSN is leading the way in nutrition and supplementation,” McGregor said in a statement. “They are breaking barriers in their field and I am breaking barriers in my field. It’s a partnership.”

I'm not trying to rub it in posting these. We don't even have these at home. I am blessed. I celebrate and reward each of these good moments with more hard work and effort. And through this I receive more good moments. Nice things in life are motivating. They are designed to push you further. Embrace them. Use them as motivation and you will have them.

How does he spend the wealth he’s gained? As McGregor told Wall Street Journal, he’s “buildin’ a proper fleet” of cars. According to the report, he has quite the collection of luxury cars. McGregor owns a Mercedes S500 AMG Coupe, which starts at $150,000, a Cadillac Escalade, a Range Rover, a BMW 4 series, a BMW 5 series, and a BMW i8, as noted by Wall Street Journal in early December.

Following his victory against Aldo at UFC 194 on December 12, Rolling Stone reported that McGregor dropped $500,000 on a Rolls-Royce. In January, TMZ reported that he added to his rare collection of vehicles with a a Lamborghini Aventador LP 700-4 Roadster— which also costs around $500,000. The Lamborghini actually spits hot fire, which is why he has called it the “flame thrower” on social media.

“I’m not trying to rub it in posting these,” McGregor wrote on Instagram. “We don’t even have these at home. I am blessed. I celebrate and reward each of these good moments with more hard work and effort. And through this I receive more good moments.” 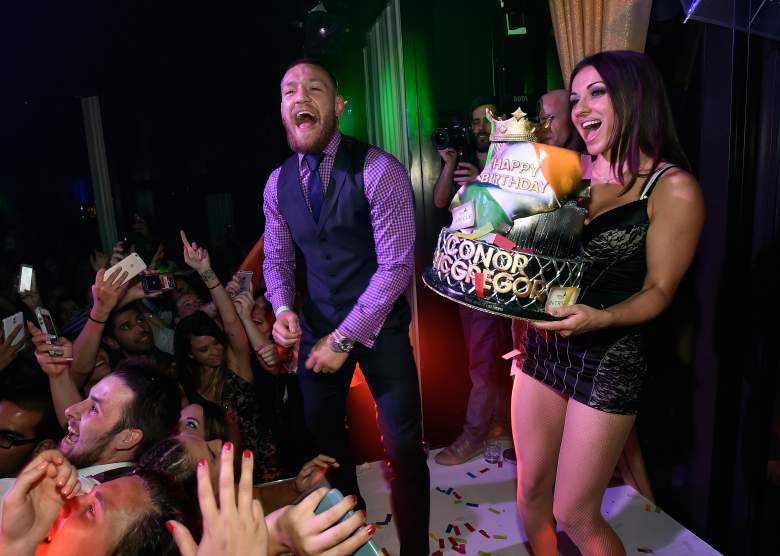 That puts him in the company of athletes such as Boston Red Sox’s David Ortiz and Chelsea soccer player Eden Hazard, who both came in tied with McGregor at No. 85. 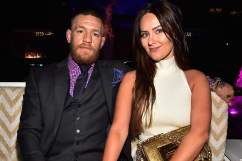 Read More
Conor McGregor, Net Worth 5 Fast Facts
Conor McGregor takes on Nate Diaz in a rematch of their first fight on Saturday at UFC 202. Here's more on McGregor's net worth, salary and endorsements.