The 30-year-old Jeff and 28-year-old Tiffany also ran in the London Olympics, but both failed to reach the finals in their events. This will probably be their last shot at Olympic medals. 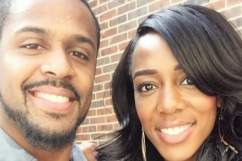 Read More
Gallery, Instagram, Rio Olympics 2016, Track & Field
Jeff and Tiffany Porter are both running in hurdles events at the Rio Olympics, but are representing different teams. Here's a look at their best photos.