Quarterback Landry Jones #12 of the Oklahoma Sooners and offensive MVP is interviewed by ESPN’s John Saunders after the Sooners 48-20 victory against the Connecticut Huskies during the Tostitos Fiesta Bowl at the Universtity of Phoenix Stadium on January 1, 2011 in Glendale, Arizona. (Photo by Christian Petersen/Getty Images)

John Saunders was a famed sports journalist for ESPN and ABC. He passed away today at the age of 61.

A cause of death was not immediately released by his family or ESPN.

His wife, Wanda Saunders, called 911 after finding him unresponsive and not breathing at their home in New York, TMZ reports.

Hastings-on-the-Hudson Police Chief Anthony Visalli told TMZ emergency responders went to the home about 4 a.m., but Saunders could not be revived. He was pronounced dead at the scene. A detective went to the house, but there was nothing suspicious found. TMZ also reports that there were no signs of foul play and the medical examiner rejected the case as a result.

“This tragic news brings us unspeakable sorrow. John was the patriarch of our family, and we can’t believe he is gone. We are sincerely touched by the outpouring of support and sadness, which is a reflection of the character and integrity that defined him,” his family said in a statement. “While we don’t yet have all the specifics, John wasn’t feeling well physically in recent days and sadly, he was unresponsive earlier this morning. We appreciate all of the thoughts and prayers for our cherished father, husband, brother and uncle.”

TMZ reports an official cause of death has not yet been determined.

John was an extraordinary talent and his friendly, informative style has been a warm welcome to sports fans for decades. His wide range of accomplishments across numerous sports and championship events is among the most impressive this industry has ever seen. More importantly, John was a beloved and devoted family man who cared deeply about people and causes, as evidenced by his long-standing efforts as a passionate board member for The V Foundation for Cancer Research. He was one of the most significant and influential members of the ESPN family, as a colleague and mentor, and he will be sorely missed. Our thoughts are with his loved ones at this extremely difficult time.

Saunders signed a multi-year extension on his contract with ESPN in 2015.

After the announcement of his death, Dan Le Batard said on ESPN radio that Saunders had suffered from “equilibrium issues” for quite some time.

Saunders missed a weekend of college football coverage in September 2011 after he was injured in a fall, ESPN said in a press release issued at the time.

“This weekend, John will be absent from ESPN’s coverage as he recovers from injuries suffered from an accidental fall last Saturday. A full recovery is expected,” ESPN spokesman Josh Krulewitz said in the release.

We are heartbroken to report longtime ESPN personality John Saunders has died. He was 61. pic.twitter.com/GeRy7wtqNv

He was not known to be battling any potentially terminal illness, such as cancer, but Saunders had publicly discussed his battles with depression.

Saunders recently co-wrote a book with John U. Bacon, Playing Hurt: My Journey from Despair to Hope, about his battles with depression. It is set for release in April 2017.

According to the description of the book, Saunders “confesses his constant battle with depression and how it nearly cost him his life.” The book, “welcomes readers into the heart of his desperate struggle against depression: from insights into the illness’s root causes to the nature of modern treatments, from both a medical and cultural perspective. His story unfolds as so many of our lives do – among family, friends and colleagues – but it also peers into places we don’t often discuss openly – psych wards and hospitals. Here is the honest story of a public figure facing his own mental illness head on, and emerging far better for his effort.”

He talked about mental illness in a 2013 public service announcement for the U.S. Department of Health and Human Services:

Stories of Hope and Recovery: John Saunders"Asking a person who is suffering to move on is like asking a person with a broken leg to run a marathon." John Saunders, a sports journalist, shares a personal story of hope and recovery from mental health problems, especially about how to support a loved one with a mental health problem. FOR MORE INFORMATION: How you can support a friend or family member with mental health problems: http://go.usa.gov/Wuu3 How parents and caregiver can support their children or other dependents: http://go.usa.gov/WuzF How you can start a conversation about mental health: http://go.usa.gov/WuzW Sign up to receive email updates from MentalHealth.gov: https://public.govdelivery.com/accounts/USHHS/subscriber/topics?qsp=USHHS_1 — U.S. Department of Health and Human Services (HHS) http://www.hhs.gov We accept comments in the spirit of our comment policy: http://www.hhs.gov/web/socialmedia/policies/comment-policy.html HHS Privacy Policy http://www.hhs.gov/Privacy.html2013-06-03T12:44:28.000Z

“Mental illness, despite it’s seriousness, can be looked through judgmental eyes for many people,” Saunders says in the video. “‘Pull yourself together,’ ‘suck it up’ and don’t worry about it are things said even by loved ones. Those well meaning people who don’t understand it’s not as simple as cheering up. Asking a person suffering to move on is liking asking a person with a broken leg to run a marathon. You wouldn’t tell someone who can’t walk to get out of bed.”

Saunders said that what is needed is understanding and help, which he said is available.

“Don’t hide behind a mask that allows others to believe everything is fine,” Saunders said. “Talking about your issues will first relieve the isolation, but allow your support system to grow. Getting the understanding you need and the help that is available begins with you stepping out of the shadows of fear and giving them a chance to help. Not only should you talk about it, you need to talk about it.”

Saunders said his sister hid her pain from their family.

“We must have a society learn to recognize the signs and reach out to those we know are troubled,” Saunders said. “Turning our heads or trying to be a cheerleader to snap someone out of it could end in tragedy. It doesn’t have to. Be the one who reaches out to save someone. Or maybe it’s you. Be the one to save yourself.”

The video points people to mentalhealth.gov for more information and resources.

Saunders was a founding board member for the Jimmy V Foundation for cancer research since its creation in 1993. He was also an advocate for juvenile diabetes. He was born on February 2, 1955 in Ajax, Ontario, Canada and lived in Hastings-on-Hudson, New York, with his wife, Wanda, and two daughters, Aleah and Jenna.

He began working at ESPN in 1986 as a SportsCenter anchor after spending time at WMAR-TV in Baltimore and CKVR-TV in Toronto. Saunders played hockey at Western Michigan University before becoming a sportscaster. 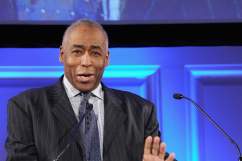 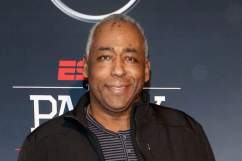 Read More
ABC, ESPN, Sports
John Saunders was a famed sports journalist for ESPN and ABC. He passed away today at the age of 61. How did the famed sportscaster die?