Olympic swimmer Michael Phelps found himself in hot water after a photo was leaked in 2009 showing him smoking pot out of a bong.

The Olympic great released a statement the very next day to address the infraction. He did not dispute the validity of the photo, which was published by the tabloid News of the World. In a statement released to one of his agents Phelps said, “I engaged in behavior which was regrettable and demonstrated bad judgment. I’m 23 years old and despite the successes I’ve had in the pool, I acted in a youthful and inappropriate way, not in a manner people have come to expect from me. For this, I am sorry. I promise my fans and the public it will not happen again.

CNN’s Piers Morgan spoke with Phelps about the infamous photo in a 2012 interview. “I’ve literally made a boatload of mistakes, and you know, that’s a part of growing and learning and becoming an adult. With every mistake that you make, you have to pay for the consequences that come your way, Phelps said. When asked if he lost his cool from the photo being leaked, he replied that the feeling was “the worst in the world, the lowest of low.”

The most decorated Olympian in history said the worst part was telling his mother. He told Morgan:

My mom has always been, obviously how all moms are, you know they’re very supportive in their children. My mom growing up always would let us, kind of, choose the decisions that we wanted to. But if we made those decisions we’d have to live with the consequences that came their way. So obviously I was very disappointed in the decision that I made. But obviously I learned from it…and I’ll make a million mistakes in my life but as long as I never make the same mistake again then I’ve been able to learn and grow.

You can watch Phelps’ response below.

Just a few years later Phelps was once again under public scrutiny for driving while under the influence of alcohol. Phelps was arrested and charged with his second DUI from the 2014 incident. “I set myself down a downward spiral. I think it was more of a sign than anything else that I had to get something under control whatever it was,” Phelps told Matt Lauer in an interview. When asked if it was a cry for help, Phelps responded, “I think so, I really do.”

Phelps voluntarily checked himself into rehab for 45 days following the arrest. 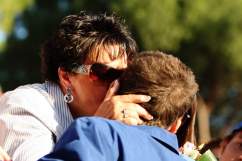