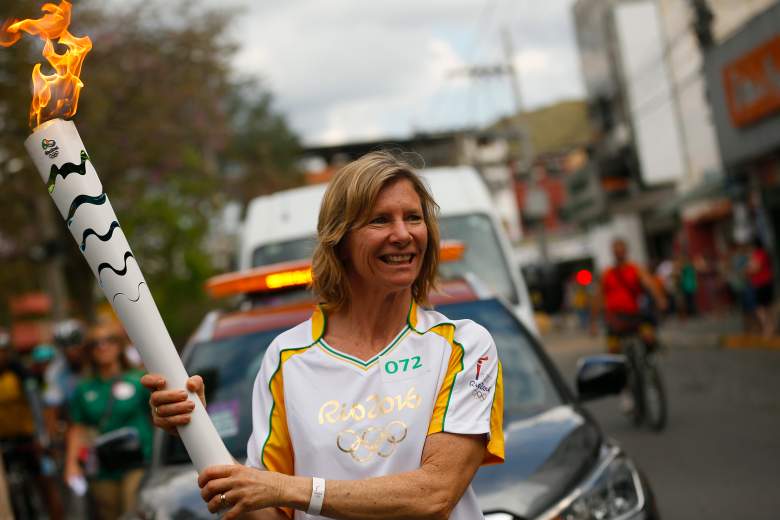 The Olympic flame is a symbol of the Olympic Games. As of Tuesday, the torch relay for the 2016 Summer Olympics Games was making its way through Rio de Janeiro State. This evening, the torch will arrive at its final destination in Rio. Over the years, it has become tradition for athletes, former athletes, celebrities, and people with significant achievements, to carry the flame, and in the past, the final bearer of the torch has included legends like Muhammad Ali, Cathy Freeman, and Wayne Gretzky. But who will be tonight’s final torch bearer? And where does the tradition originate?

Read on to find out more about the history of the Olympic flame.

1. The Flame Is Lit At the Site of the Ancient Olympics in Olympia, Greece

The Olympic Torch flame is lit several months before the games begin in front of the ruins of the Temple of Hera in Olympia, Greece. The tradition is meant to symbolize the connection between the ancient and modern Olympic games. In centuries past, according to InfoPlease, “…a high priestess of the Temple of Hera would light the flame using a skaphia, the ancestor of parabolic mirrors.” The celebration at the Temple of Hera is performed by eleven women, who all represent the Vestal Virgins– in ancient Rome, Vestal Virgins were priestesses or goddesses of hearth.

After traveling through a number of hands in a number of countries, the torch is used to light a cauldron, which stays lighted until the Closing Ceremonies, at which point it is extinguished. And who gets the honor of carrying the torch? Local residents who have displayed an impressive record of community service carry the torch, along with a number of renowned athletes and celebrities.

2. The Torch Is Designed to Resist Effects of Wind and Rain 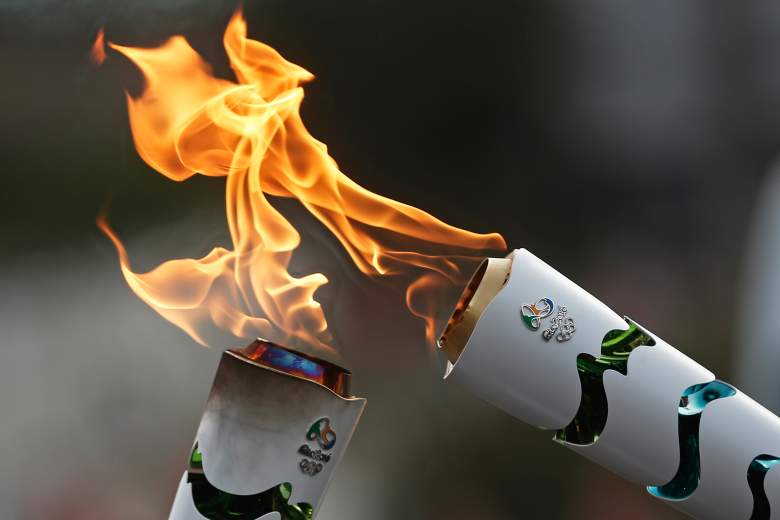 The use of the torch as we know it began in 1936 at the Berlin Games. During that relay, 3,330 runners traveled through Greece, Bulgaria, Yugoslavia, Hungary, Austria, Czechoslovakia, and Germany, to carry the torch to its final destination. 2004 marked the first year that the Olympic Torch not only started and ended in Greece, but passed through every continent. While traveling between cities, the torch is taken on a plane, and between cities, it moves in the hands of the torch bearers.

A 1996 article written by the Washington Post writes, “The torch features a dual burner system that will help the flame resist wind and rain during relay.” While the torch is in transit, it’s kept in a lantern, and “closely guarded to assure the flame is never extinguished.”

3. The Final Torch Carrier Is Kept Secret Until the Final Moments 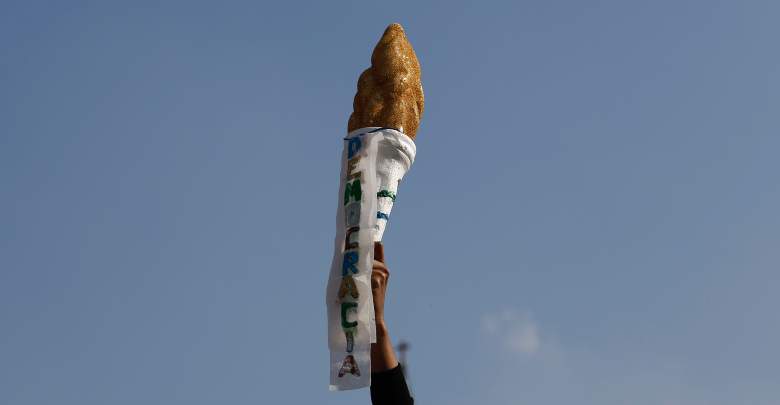 Fire, for ancient Greeks, had divine purposes– it was believed to be stolen from the gods by Prometheus. (Getty)

The final person who has the honor of carrying the torch is typically kept a secret until the last possible moment. In decades past, it has been carried by a sports celebrity of the country hosting the Games.

At the end of the relay for the 2012 Summer Olympics opening ceremony, the torch arrived on a speedboat driven by David Beckham, who, in turn, was given it by Steve Redgrave. Redgrave then handed off the torch to seven young athletes, who placed their flame in one of the 204 petals. This design came together to create the torch cauldron, which was lit for the entirety of the 2012 Olympics.

4. The Torch Was Briefly Extinguished in 2008

During the 2008 Olympic torch relay, the flame was briefly extinguished by protestors. Because of these protests– carried out by advocates of a range of issues, including Tibetan independence, animal rights, and those demonstrating against China’s human rights record– the torch’s path had to be changed. The flame was briefly extinguished on several occasions by Chinese security officials– namely when the path traveled through Paris. Counter-protests by overseas Chinese and foreign-based Chinese nationals took place, and the Chinese government vocalized their sentiments that the attacks on the flame in London and Paris were seen as deliberate interruptions.

After these protests, The Guardian released an article outlining how Beijing suffered when the torch was extinguished. “It was a second day of severe embarrassment for Beijing following similar skirmishes in London yesterday as activists demonstrated against China’s recent violent crackdown in Tibet. The Paris stage of the relay ran into trouble immediately after leaving the Eiffel Tower at lunchtime, even though hundreds of riot police and security officials flanked the torch bearers.”

5. The Relay Ends on the Day of the Opening Ceremonies

The Olympic torch relay concludes on the day of the opening ceremonies, in the central stadium of the Olympic Games. It typically involves the final bearer running towards the cauldron, which usually sits at the top of a large staircase, and using the torch to start the official flame. The flame burns for the duration of the Olympics, until it is extinguished at the closing ceremonies.

In 1948 and 2012, the torch traveled by boat across the English Channel and by rowers in Canberra. It also sailed in a dragon boat in Hong Kong in 2008. 1952 marks the first time the flame was transported by airplane. In 2004, a global torch relay took place for the Athens Summer Olympics– that flame covered over 78,000 km over 78 days.

Read More
Rio Olympics 2016
What's the history behind the Olympic Torch? What's the route of the flame for the 2016 Rio Summer Olympics? Find out here.