Based on their reactions, it’s likely that Rick and Lynn Raisman are more nervous than their daughter for the 2016 Rio Olympics. At the London games, Aly’s parents stole the show with their extremely expressive reactions to Aly’s routines, and the couple could barely contain their stress while watching her at the preliminaries on Sunday. Perhaps their rollercoaster-looking movements are a good luck charm for Aly, though, as the 22-year-old finished ahead of reigning gold medalist, Gabby Douglas, at Sunday’s meet, thereby qualifying for the individual all-around competition with Simone Biles. Scroll down to see some of the most amusing videos and Tweets of Lynn and Rick Raisman.

All aboard the Raisman Roller Coaster of Emotions ?#Rio2016 https://t.co/gBDMG5o08d

These fidgety reactions have led to the couple going viral at this summer’s Olympics. What’s interesting is that they had almost the exact same reactions to Aly’s performances in London. Perez Hilton writes, “Really, its AH-Mazing to see mom and dad quite literally live through the entire routine with every emotion on their faces, and in their bodies.”

.@Aly_Raisman's parents are back at it again with the shoulder lean! #Rio2016 pic.twitter.com/4WGS0drAcc

In the end, their facial (and body) expressions are a sign of how badly they want their daughter to succeed this summer. In 2012, Aly won gold in the team and floor competitions, and placed 3rd on the balance beam. Her accomplishments made her the most decorated gymnast at the London games. At Sunday’s qualifiers, the 22-year-old proved herself once again with an all-around score of 60.131– narrowly beating out Gabby Douglas. Simone Biles, Raisman, and Douglas, finished 1,2,3, respectively, but because of the rule that each country can only send two gymnasts to the individual all-around finals, Douglas won’t be competing in the individual competition. 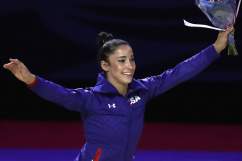 Read More
Gymnastics, Rio Olympics 2016
Lynn and Rick Raisman have been adorably tense watching their daughter, Aly, as she competes in the Rio Olympics. Check out the funniest tweets and memes of the couple here.