The Memphis Grizzlies’ announcer has been fired after he was accused of filming “upskirt videos” at the church where he was a pastor. In a statement, the NBA team said that Rick Trotter, 40, had been let go. The press release read, “Rick Trotter is no longer affiliated with the Grizzlies organization. We have no further comment on the matter.” Meanwhile, his other former employer, the Downtown Church, said that Trotter had been fired earlier in 2016 due to misconduct that was “sexual” in nature.

On the evening of August 9, Trotter was taken into custody in Memphis.

1. Trotter Was Fired From His Job as a Pastor Due to ‘Deception & Moral Failures of a Sexual Nature’

In a statement, the Downtown Church said:

We, the elders of Downtown Church, are deeply saddened to announce that, effective May 27, Rick Trotter was terminated as an employee of Downtown Church. This was the result of deception and moral failures of a sexual nature.

As you can imagine, this revelation has been deeply devastating to all of us. We, as elders, have come around his wife and children offering spiritual, emotional, and financial support. We will continue to support and encourage them, and we know the Downtown Church family will follow suit.

We have responded swiftly as information has emerged, with counsel from trusted professionals. As we move forward in this process, we want the congregation to know we are fully committed to operating with integrity and transparency. Please join us in praying for all involved.

On his now-deleted website, Trotter explained that his job title at the Downtown Church was “Worship and Creative Arts Pastor.” He describes his mission as, “to glorify God by creating a radical new community that molds loving disciples of Jesus through the power of the gospel.” On the church’s website, he’s described as joining the church in August 2011 and becoming a permanent pastor in November 2012.

The Memphis Commercial Appeal reports that Trotter has no prior arrests in Tennessee but was picked up shoplifting in Atlanta in the 90s.

2. Trotter Was Managing a Chick-fil-A When He Won a Contest to Become the Grizzlies’ Announcer

In 2006, Trotter, then managing a Chick-fil-A, beat out 28 other people to become the Grizzlies announcer, according to NBA.com. He replaced John Paul Stevenson in the job who had moved on to Houston.

He told the league’s website upon his appointment, “I didn’t (expect to get the job), mostly because I didn’t have the experience. I kind of felt like if somebody heard me, they’d say, ‘Hey, that’s pretty good’, but I thought it would just be left at that. I felt it was a long shot, but hey, it was worth a try.” Trotter also explains that he’s an Atlanta Hawks fan in the article.

.@RickTrotter warms up his vocals for opening night vs the #Cavs on 10/28! Single game Tix on-sale 10/3 at 10am/ct pic.twitter.com/Qm3xfE5PGe

Trotter also sang the national anthem at games. The Memphis Commercial Appeal reports that Trotter was a graduate of the Tri-Cities High School of Visual and Performing Arts. The newspaper also says that he idolized former Chicago Bulls announcer Ray Clay.

According to a 2014 interview, Trotter moved to Memphis from his native Atlanta in 2005 to work with a church. He said, “When I was being courted here to Memphis, a small part of my decision was based on the fact there was a professional sports franchise (in Memphis). That showed me this was a city which was progressive and not some rinky dink town on a map.” That article mentions that Trotter has two children with his wife.

3. Trotter Complained in 2015 That It Was Becoming Hard for Him to Go to the Store or the Movies Because of His Celebrity

During a 2015 interview with FanSided, Trotter was asked about becoming a “local celebrity.” Trotter said:

As the team became more popular in the city, my popularity grew as well. It’s hard to go to the movies or grocery store without someone trying to imitate my gruff vocal style…

I had a guy follow my family and me around the grocery store once because he thought I was the Grizzlies announcer but was too unsure to say hello like a non-creepy person. My wife was more than a little concerned.

Some of these PA guys just scream and yell the entire game. Player makes a layup in a 20 point game and it's like he just cured cancer.

In 2013 after the Memphis Grizzlies defeated the Los Angeles Clippers in Game 3 of their playoff series, Golden State Warriors coach Steve Kerr took to Twitter to admonish Trotter’s style of announcing. Kerr, who was working for TNT at the time, said, “Some of these PA guys just scream and yell the entire game. Player makes a layup in a 20 point game and it’s like he just cured cancer.”

When a Grizzlies fan responded to Kerr, the Warriors coach wrote back saying, “[Trotter] sounds like he wants to fight someone the entire game.” Another person wrote, “Dear @SteveKerrTNT, we dont care how you feel about @RickTrotter. We love him. Nobody likes a boring PA guy. Sincerely, GrizzNation. kbye.”

In the wake of his arrest, Trotter has deleted his Twitter account. He told FanSided in 2015 that the Clippers were his favorite Grizzlies opponent. Trotter said, “L.A. is a city of glitz and glamor; Memphis is largely a blue-collar town.” He added that the Memphis crowd had no time for “flopping.”

During his 2015 interview with FanSided, Trotter explained that his favorite phrase to say is, “Shot clock violated.” He said, “The Grizzlies defense became their hallmark. When the opposing team spends 24 seconds trying to get a shot to the rim and fail, the horn sounds and I shout “Shot Clock Violated!” and my beloved home crowd goes wild.” 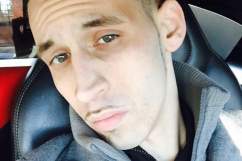