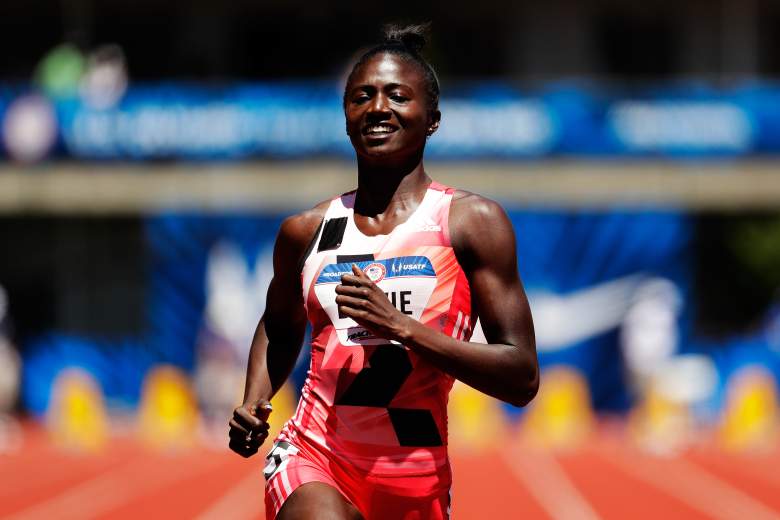 Tori Bowie credits much of her success to her grandmother, who raised her. (Getty)

Tori Bowie advanced to the semifinals of the women’s 100-meter run at the Olympics on Friday night.

The former Southern Miss standout finished first in her heat with a time of 11.13. At the U.S. trials last month, Bowie cut her fastest 100-meter time to 10.78 seconds.

Bowie’s blazing speed has many predicting that she’ll finish on the podium in Rio. The Associated Press recently projected her to bring home a gold and silver medal. As the 25-year-old track star competes on the biggest stage of her life, her family is in the stands cheering her on.

Here’s more about Bowie’s background, and her where she finds her strength.

1. Her Grandmother Adopted Her at a Young Age 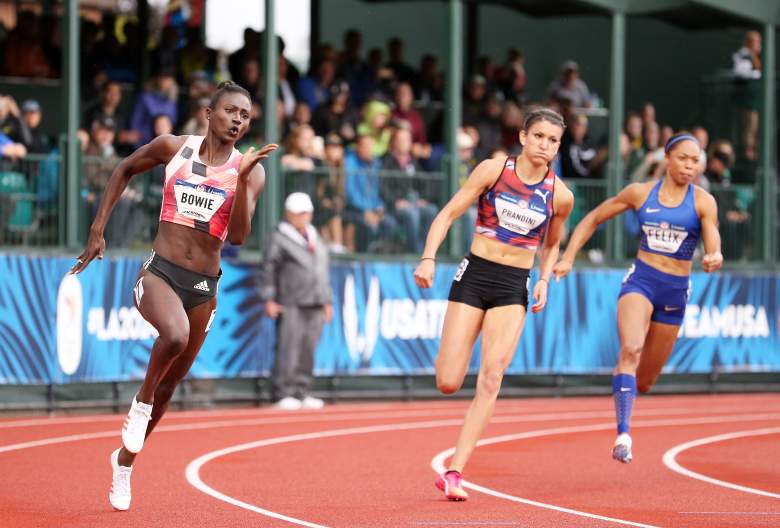 When Bowie was only two years old, she was left in foster care along with her younger sister, Tamarra. Their paternal grandmother, Bobbie Smith was granted legal custody of both after a tough battle.

Smith, 69, said the decision to adopt Bowie and Tamarra stemmed from her own grandmother.

“We were poor country people and she took in six (grandchildren), including me, and it was hard for her,” she told the Clarion-Ledger. “So I knew if she could take in six, I could take in two. That helped motivate me and let me know I could do it.”

Smith told WBTV she always wanted to make sure she provided a good, stable home for her granddaughters.

“It makes me think about no matter how bad things can get or start in your life or be in your life, it’s still good things that can come out of it,” she said.

Smith recently shared some of the advice she gave to her granddaughters when they were young.

“I encouraged them to go to school, don’t think about boys at a young age, and to do good,” Smith told NBC. “And they took my advice.”

2. Bowie Has Called Her Grandmother Her Inspiration

Smith raised five children of her own, as well as her two granddaughters, who embraced her as their “mama.”

They grew up in a humble home in the rural Rankin County unincorporated township of Sandhill, Mississippi.

“My grandmother has been the role model in my life,” Bowie recently told NBC. “She ended up fighting for us, got custody of us. We didn’t have much, but something that she did give us was character.”

Smith instilled the importance of hard work, and perseverance in her grandchildren.

“My grandmother told me a long time ago, ‘I don’t care if you’re sweeping a porch for a living. She said, you need to do your best.’ So I’ve lived by that every single day,” Bowie told WBTV.

She says those values impacted her life on and off the track.

“My family played a huge role in my success, a huge role. I think we had to overcome so much and I think it’s making me a stronger individual,” Bowie told the Indian Express.

Although her grandmother did not make the trip to Brazil, she is proudly watching back home in Mississippi.

“They tell me, ‘Mama, we’re so glad you got us,'” Smith told the Clarion-Ledger. “(Tamarra) told me just the other day, ‘Mama, I love you so hard.’ That got me a little teary-eyed. It’s just a blessing.”

3. Her Younger Sister Was Also on the Track Team at Southern Miss

Bowie’s younger sister by 11 months, Tamarra, was also on the track and field team at Southern Miss.

“I follow her everywhere,” Tamarra told the Clarion-Ledger. “I was that annoying little sister. Even when she went to college. I followed her there. But it finally hit her the other day when she was going through processing that she’s going to the Olympics. I told her, ‘I’ve been waiting for it to hit you!’ ”

Tamarra is currently enrolled in law school at Mississippi College. She made the trip to Rio to support her big sister, and told the ledger that they have remained in close contact throughout Bowie’s Olympic training.

4. She Grew Up With Her Extended Family Nearby

Some of the family and I.. The bond of forgiving love and strength! One love? @tamarrabowie @berrycalvin43 @grantdante

Bowie was raised with a lot of family nearby–at least 20 cousins, aunts and uncles. They all lived in a group of four houses in the rural countryside, according to Sports Illustrated.

“My family is so weird,” she told Sports Illustrated. “We had four kids enter college the same year I went.”

Bowie has said she was a tomboy growing up, and described her childhood as one filled with sports, and outdoor activities.

“I went where the boys in the family went,” she told Sports Illustrated. “We would shoot basketball, we would shoot guns, we’d play cards, we’d go fishing at the pond.” Bowie says she first drove a car—on the highway—at age 12 and owned three cars—the first an old Buick—before she had a driver’s license. “I enjoy where I’m from. That’s me. And my family never let me get far away.’’

The Olympian said her family has helped her stay grounded throughout the ups and downs of her athletic career.

“I come back to Mississippi, because my family is here,” Bowie told NBC. “I don’t think that I would ever find the type of support that I have here. This is where I find my strength.”

Get off me girl…. Haha love you sis

At an early age, Bowie started playing basketball with her cousins in the yard.

“My oldest son had set up a basketball goal out there, like over there,” her grandmother told WBTV. “And they’d be out there in the dirt, bare feet, playing ball.”

Although she was a young girl at the time, Bowie’s cousins never gave her a break.

“They just, they never took it easy on me, you know,” she said. “Never let me win. Made me tough.”

Read More
5 Fast Facts, Rio Olympics 2016
Tori Bowie advanced to the semifinals of the women’s 100-meter run at the Olympics on Friday night. She credits her family and humble beginnings to much of her success.