Aly Raisman has made headlines for a number of reasons at the Rio Olympics so far. Not only did she place 2nd after frontrunner, Simone Biles, at Sunday’s qualifiers, but Aly’s parents have been the focus of many news articles for their expressive reactions to her routines. And while we may know a bit about Raisman’s gymnastics accomplishments and family-life, we can’t help but wonder if she has a boyfriend. Is she single? Dating? Did anything change after she posed nude for ESPN’s 2015 Body Issue? Read on to find out.

A couple years ago, Raisman was rumored to be dating a boy named Jamie McGill, who played lacrosse for Needham High. McGill asked Ali to prom by spelling out P-R-O-M in Christmas lights on the football field. Despite the fact that Aly was training for the Olympics, and wasn’t actually going to school, she said yes to McGill. On strict orders from her coach, though, Aly had to leave the prom early and couldn’t stay for the after-party.

According to his bio on the St. Michael’s College website, McGill competed three years of varsity lacrosse and two years of varsity golf for Needham High School. On top of that, he was Needham High School’s Academic Achievement Award winner in social sciences. Shortly after Raisman came out claiming she and Jamie were just friends, she and McGill were photographed together at the Weinstein Company’s Golden Globe Awards Party, leading people to wonder if they really were an item and Aly was just trying to cover it up. Taddlr claimed that as of 2016, Raisman was still dating McGill, but he hasn’t appeared on her social media in a number of months, and with her 35 hour/week training schedule, it seems unlikely Aly would have time for a boyfriend.

Rather, the 22-year-old is putting her energy towards being the best team captain she can be. Raisman, who’s been given the nickname ‘grandma’ as she’s the oldest of her five-member team, is tasked with keeping her team’s morale high, even in the face of the nerves and stress they’ll inevitably face. That isn’t to say, though, that she isn’t interested in dating. In fact, Raisman told Us Weekly that she wouldn’t mind going on a date with Joe Jonas. When the news outlet spoke to her after the London Olympics, Aly said she was “flattered” with Joe’s twitter compliments, and she “…would go on a date with him.” In 2012, Ryan Seacrest brought Aly up during an interview with Joe Jonas. He asked if Joe would go on a date with Aly, to which the Jo Bro said, “I think she’s fantastic. I would love to. Are you going to set me up, Ryan? Is Ryan about to set me up?” 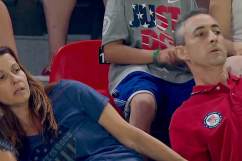 Aly Raisman’s Parents: The Tweets & Videos You Need to See

Read More
Gymnastics, Rio Olympics 2016
Who is Aly Raisman dating? Does she have a boyfriend? If she single? Find out here.