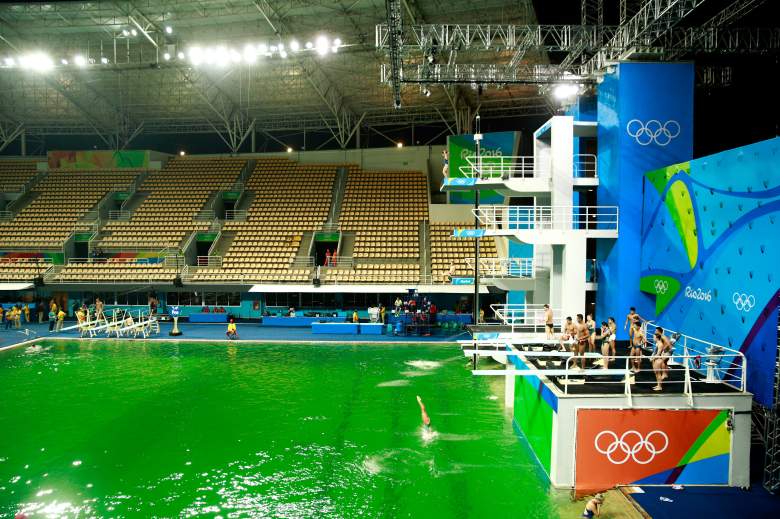 The Olympic diving pool at the Maria Lenk Aquatic Center became discolored during Tuesday’s competition as reported by several outlets.

Can anyone explain why the water's turned green at the diving? No one here can. Pretty sure it was blue yesterday. pic.twitter.com/GYfap9Gzz0

Several side-by-side comparisons showed the pool’s change in appearance from above and below the surface. In this photo comparison from Deadpsin, the water also appears clouded.

Something unfortunate has happened to the Olympic diving venue: https://t.co/MjC3ey8cyF pic.twitter.com/ikLllgjsFu

Many are wondering the cause for the discoloration, including Matt Majendie of the London Evening Standard.

So watergate at the diving was no problem apparently. Organisers say they don't know why it's green but there's nothing to worry about.

Majendie said on Twitter that Olympic officials could not give an answer as to why the water turned green. However, many people have speculated that the change is a result of algae in the water. The pool in Rio is outdoors, which can lead to algae growth. Pool water can turn green when there’s too much algae and not enough chlorine.

“Water tests at Maria Lenk’s Aquatic Park were conducted and there was found to be no risk to the athletes’ health,” an official reportedly said. “We’re investigating what the cause of the situation was, but we are happy to report that the competition was successfully completed.”

The water in diving pools is typically five to ten degrees warmer than the water in pools used for swimming, according to Sports Illustrated. Warmer water is more conducive to algae growth.