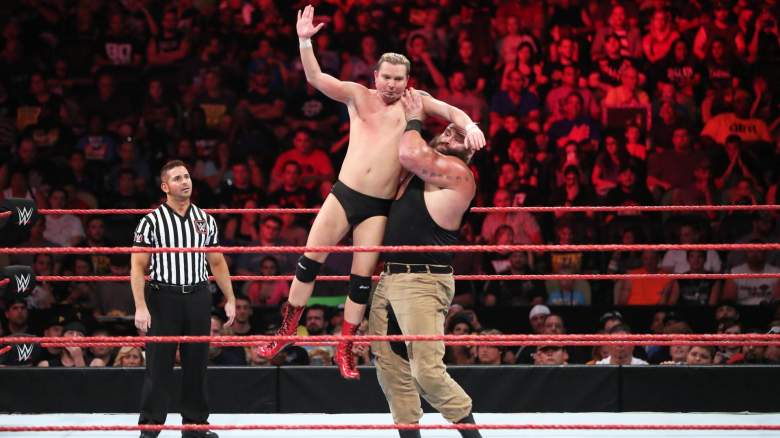 James Ellsworth has taken the wrestling community by storm.

The 31-year-old appeared on Monday Night Raw in July, and he made a huge splash, in part just because of how hilarious it was to see someone so small trying to overcome the odds and defeat the absolute beast that is Braun Strowman. There have been a lot of jobber matches on Raw recently, though, and normally James Ellsworth would never be seen again.

But fans were surprised to see Ellsworth pop back up on SmackDown this week and actually have a major role. When AJ Styles could not find himself a tag team partner for the main event of the show, Daniel Bryan decided to stick it to Styles by pairing him with the jobber who Strowman destroyed two months ago. Ultimately, The Miz beat him up and took his place in the match, but Ellsworth still became perhaps the most talked about person from SmackDown this week and the subject of countless memes on social media.

Here’s everything you need to know about James Ellsworth.

1. He Has Been Wrestling for 14 Years

James Ellsworth has been involved in independent wrestling for many years. (Twitter/@realellsworth)

James Ellsworth is living proof that sometimes you have to slave away for years before your work pays off in a major way. He just recently had a brief squash match on a WWE show, but prior to that, he had been wrestling for 14 years.

He has worked in various promotions on the East Coast, and he’s a promoter for Adrenaline Championship Wrestling in Millersville, Maryland. This job requires a tremendous amount of work passing flyers around town and trying to drum up buzz.

“Five thousand flyers around town, 100 posters, any way we can get the word out to have a good show, we do,” he said in a Reddit Ask Me Anything. “I have a good team. We’ve been running for six years now and in the past three we’ve turned a profit. Hard work certainly pays off.”

Ellsworth also noted in an interview on WWE.com that he cuts promos whenever he can, and so when he learned that he would actually be getting to speak before his match against Braun Strowman, he was the happiest guy in the world.

2. He Came Up With His Catchphrase Himself 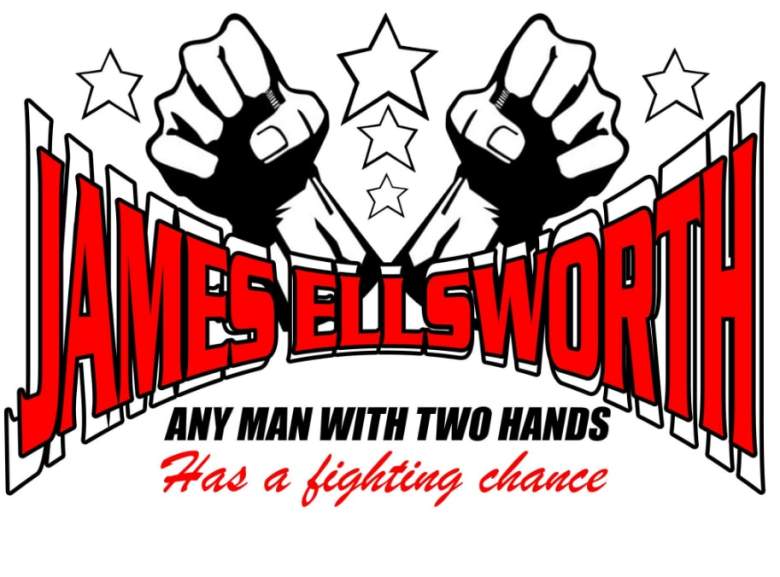 James Ellsworth’s catchphrase is already being sold as a t-shirt. (Twitter/@realellsworth)

Before his now infamous match against Braun Strowman, Ellsworth said that he believed he could win because “Every man with two hands has a fighting chance.”

This became something of a catchphrase for Ellsworth (even though it was only said once), being used in many of the online memes and even plastered over t-shirts. It turns out, this line was not given to him by the WWE’s creative department; he got to come up with it himself.

“They have scripts to hand out, and they gave me the script. I’m reading it, and they were like do you have any ideas of what you might add to that,” Ellsworth explained on In Your Head Radio via Wrestlezone. “…I was like, ‘Well, can I say this line about my hands? I think it would be cool.’”

Ellsworth went on to explain that the idea needed to be cleared with the office, and he was told about an hour later that they loved the line and wanted him to use it.

In his Ask Me Anything, when one Reddit user jokingly asked Ellsworth what he has against men with one or no hands, Ellsworth responded by saying, “I’d think that any man with any number of hands has a chance, the more hands the better I suppose.”

3. He Was Complimented by Chris Jericho and Vince McMahon 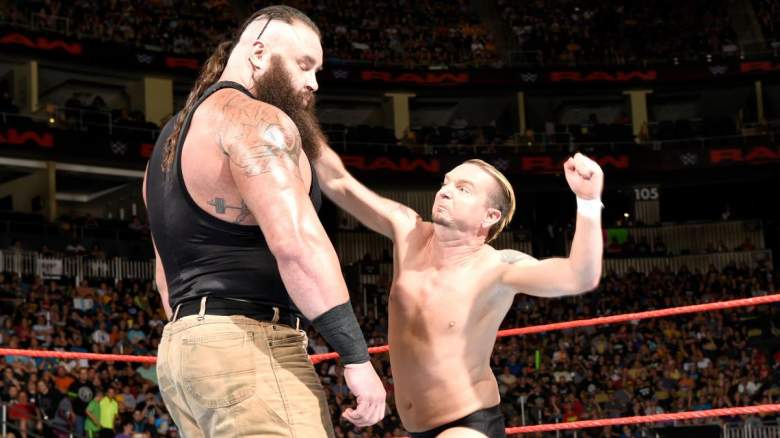 Ellsworth had a good experience speaking with Vince McMahon and Chris Jericho after his match. (WWE.com)

Although James Ellsworth had an incredibly minor role on Monday Night Raw in July, it sounds like everyone backstage was quick to embrace him and offer compliments for his work, including the boss himself.

In his Reddit Ask Me Anything, Ellsworth said that after the Strowman match, he was told that Vince McMahon wanted to see him.

“He extended his hand and said, ‘you killed it, kid,'” Ellswoth said of his encounter with McMahon. “Meant a lot to me.”

Ellsworth says that he also received a phone call from Chris Jericho after Raw, long before the online memes began to dominate the Internet and before it was clear that his segment was going over well.

“He called me and said good job and that I knocked it out of the park – this was when it all first went down, before the internet blew up,” Ellsworth said. “I thought it was really cool of him.”

On Twitter recently, Chris Jericho declared that James Ellsworth is his favorite wrestler. Ellsworth says that even though Jericho was obviously joking, for Jericho to say this in any context about him is “just so awesome.”

4. He Got Noticed by Sending the WWE His Resume 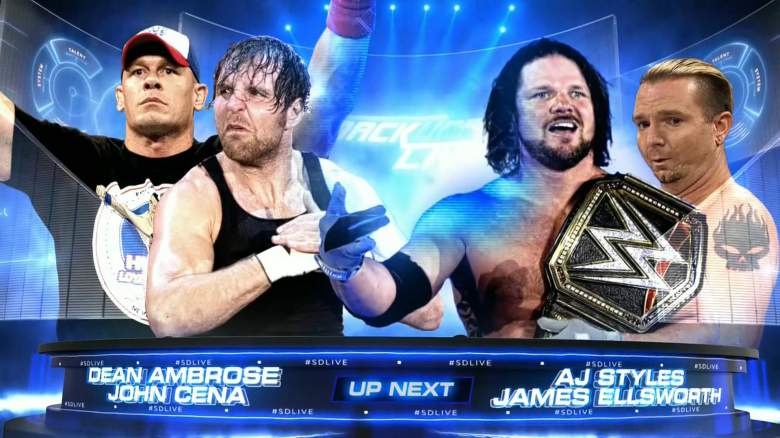 The way James Ellsworth got noticed by World Wrestling Entertainment is actually fairly mundane; he just sent the company his resume online. To this day, resumes are accepted by the WWE on recruit.wwe.com. And although Ellsworth says the WWE doesn’t say much to you, they’ve had him back a few times for dark matches, and he notes that they’re a very professional company.

“Well, actually I’ve been doing extra talent stuff for them for a couple of years now,” he said on In Your Head Radio via Wrestlezone. “I was actually a Rosebud a couple of times with Adam Rose. Ever since then every time they’re near where I live here in Baltimore, if they’re around the area, they call me and I come in as extra talent.”

Ellsworth never expected to blow up after his Raw segment, nor did he expect to be invited back again. But he recently received an email from the WWE saying they needed him for Backlash, Monday Night Raw and SmackDown this week. They didn’t end up using him on Backlash or Monday Night Raw but were able to work him into SmackDown on September 13th. The company gave him no indication of what his role would be.

“I thought it was a blessing from the sky, because they didn’t tell me what I was doing, if anything,” he said. “They just asked me to come out those three days. It’s so humbling that they got a hold of me, and I know it’s because of the fans. You guys did that FOR me.”

5. Fans Want Him to Get an Intercontinental Championship Match

The online wrestling community has decided that James Ellsworth deserves a real match, and in particular they want to get him a shot at the Intercontinental Championship. This is largely due to the fact that The Miz attacked him on SmackDown, and so Ellsworth’s most passionate fans hope to see that turned into a feud. Part of the over-the-top passion for Ellsworth is obviously a bit ironic, but many viewers also legitimately think it could be a funny ongoing storyline if Ellsworth keeps popping up on the show now and then.

When asked about this petition in his Reddit Ask Me Anything, Ellsworth said that he thought it was “awesome” and that he hopes it happens. However, he isn’t sure what his future with the WWE will be or if he will return again.