Lionel Messi of FC Barcelona reacts to an injury during a match on September 21. (Getty)

FC Barcelona and Argentina superstar Lionel Messi was forced to leave a match with what is being described as a recurring groin injury on Wednesday, at Camp Nou Stadium in Barcelona, Spain. The legendary club now will have to make due without their superstar goal scorer for several upcoming matches at least.

Here’s what you need to know about the blow to Messi and Barca.

1. Messi Has Been Ruled Out For Three Weeks

Messi is not expected to return from the injury he suffered on Wednesday at least until October 19, when Barcelona are scheduled to face English Premier League side Manchester City in UEFA Champions League play. The moment that Messi suffered the injury can be viewed in the video above.

The injury raised question about how Messi has been handled by both his club and country teams, following a recent spate of physical issues.

“The entire incident will inevitably lead to questions about the way Messi’s recent groin problem has been handled. He played for Argentina after Barca had diagnosed him with an injury,” wrote ESPN FC correspondent Samuel Marsden on Wednesday. “When he returned to Spain, having missed the World Cup qualifier against Venezuela, he made a quick recover and featured as a second-half substitute in the loss to Alaves. Since then he’s played 180 minutes in 7-0 and 5-1 wins against Celtic and Leganes respectively. Could those minutes have been managed a little more productively by [Barca Manager] Luis Enrique?”

Messi will not travel with the team to Germany next Wednesday, where Barcelona will face Borussia Monchengladbach in a UEFA Champions League Match Day 2 showdown.

2. Messi Was Subbed Out in the 59th Minute Of Wednesday’s Match

In a Spanish La Liga match in which Barcelona was leading Atletico Madrid 1-0, Messi appeared to pull up lame after what was described as a light challenge from Atleti Captain Diego Godin just before the hour mark. At that point the prolific scorer — the only man ever to score at least 40 goals in club competition in seven straight seasons — tried to stay in the game, but soon took a seat on the pitch, grimacing in discomfort.

He was subbed out for Arda Turan.

3. He Has Suffered A Series Of Physical Problems Recently

Last season, Messi was forced to miss two months after damaging a ligament in his left knee in September of 2015. In January, he missed another Barcelona match due to kidney stones.

He badly bruised his lower back in an international friendly against Honduras in May, suffering “intense pain,” the Argentina team doctor said. He also endured a muscle injury apparently due to “fatigue” in La Liga play in January as well.

4. He May Have Aggravated an Injury Incurred Playing For His Country

Playing for his home nation of Argentina in a World Cup qualifying match against Uruguay on September 1, Messi picked up a groin injury in the 90th minute. He stayed in for the five minutes of added time in that match, which Argentina won 1-0 on a 43rd minute Messi goal, seen in the video above. But it is now believed that he may have reinjured his groin on Wednesday.

5. Messi Is Among the Highest-Earning Celebrities in the World

Barcelona were held to a 1-1 draw by Atletico Madrid on Wednesday in a game which saw Lionel Messi brought off with a groin injury. pic.twitter.com/VcDoUAVrkZ

With all of the time has missed due to injury over the past year, and will now miss due to his groin injury, Messi is getting paid handsomely to sit on the bench. With total earnings of $81. 5 million last year, Messi was the eighth highest-paid celebrity worldwide in 2015 — and the second highest-paid athlete behind only his rival Cristiano Ronaldo of Real Madrid, who made $88 million.

For Messi, $53.4 million came from his salary for playing soccer. Another $28 million went into his bank account from endorsement deals.

Messi’s total net worth, according to the Money Nation site, is now $174.9 million. That’s down from $180 million after Messi paid several million in fines after a tax fraud conviction in Spain in June. 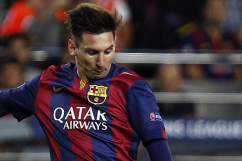