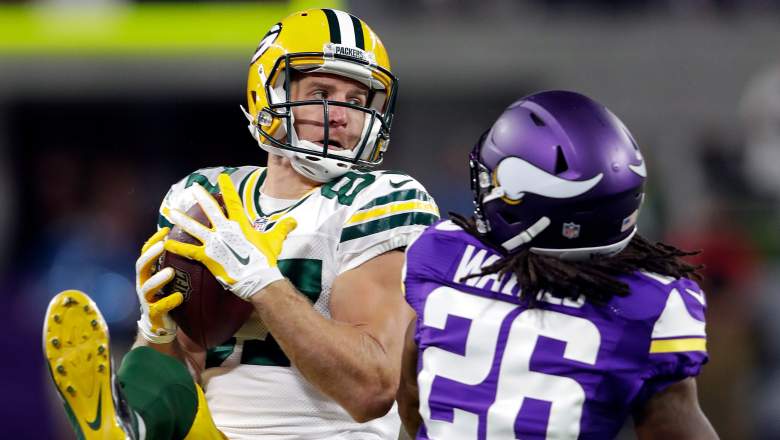 When the game was on the line, the Minnesota Vikings defense stepped up.

In his Minnesota debut, Sam Bradford completed 22 of 31 passes for 286 yards and 2 touchdowns. He hooked up with Stefon Diggs 9 times for 182 yards and a score.

Just like in Week 1, the Vikings defense stood out. They tallied 5 sacks of Aaron Rodgers, hit him 8 times, intercepted one pass and recovered two fumbles (forced four).

Rodgers finished 20 of 36 for 213 yards and a touchdown pass to Jordy Nelson. Rodgers also ran for a 10-yard score.

The Vikings (2-0) lost running back Adrian Peterson in the third quarter with what appeared to be a knee injury. He finished with 19 yards on 12 carries.

Keep reading to see the game stats and highlights:

The Packers struck first when Aaron Rodgers hit Jordy Nelson for a 1-yard touchdown pass with just over five and a half minutes to go in the first quarter.

Ty Montgomery blocked a Minnesota punt to give Green Bay the ball at its own 48 to start the drive.

The Packers then took advantage of two penalties by Vikings defensive back Terence Newman. First it was a 40-yard pass interference call to give Green Bay the ball at Minnesota’s 5. That penalty came on 3rd and 2. The next saw Newman get called for a hold, giving the Packers a 1st and goal from the 1.

Two plays later, Rodgers found Nelson for the TD and 7-0 after the PAT. It was the duo’s second touchdown connection of the season.

Sam Bradford's 1st TD with the @Vikings.
The 1st Vikings TD in the new stadium.

The Vikings got on the board with 10 minutes left in the second quarter when Sam Bradford found tight end Kyle Rudolph for an 8-yard score. The touchdown tied the game 7-7.

Rudolph caught 2 passes for 27 yards on the drive.

It was Bradford’s first TD pass as a Viking and it was the first score for Minnesota in the new U.S. Bank Stadium.

The Vikings then got a 46-yard field goal from Blair Walsh late in the first half for a 10-7 lead.

Bradford and Stefon Diggs were on the same page Sunday night.

The two hooked up for a 25-yard touchdown late in the third quarter to give the Vikings a 17-7 lead.

The Packers were driving, but the Vikings stopped them on 4th down then drove 87 yards on 6 plays in 2:46 to grab the 10-point lead.

Diggs caught 2 passes for 62 yards on the drive. Bradford completed 3 of 3 passes for 67 yards.

Just a few plays before the TD, running back Adrian Peterson appeared to have injured his knee when being tackled by Packers linebacker Kyler Fackrell after a 5-yard run.

Peterson was helped to the sideline and it didn’t seem to be able to put any weight on it. He was then assisted back to the locker room. He was declared out for the game.

Aaron Rodgers Scrambled in to Bring the Packers Within 17-14

The Vikings took a 17-7 lead, but the Packers answered right back with a 75-yard drive which was capped by an Aaron Rodgers 10-yard TD run.

The 10-play drive was highlighted by a 39-yard pass from Rodgers to Nelson to the Vikings 4.

Three plays later, Rodgers scrambled in for the score.

Green Bay forced a Minnesota punt on the ensuing possession.

The Packers then drove to midfield, but was stripped by Brian Robison and the Vikings recovered with roughly 7 minutes left in the game.

But the Packers D held once again, forcing another punt after sacking Bradford on 3rd down. Green Bay got the ball back with a little under 5 minutes remaining.

Trailing 17-14 late in the game, Rodgers was intercepted by Trae Waynes which essentially iced the game.

Get ready for tonight by watching Packers Today.

The Green Bay Packers had won four consecutive NFC North titles until last season, when that string was snapped.

The team to unseat the Packers as division champions? Their opponent in Week 2, the Minnesota Vikings.

The Vikings host the Packers tonight on Sunday Night Football. Kickoff is scheduled for 8:30 p.m. Eastern and it will be televised by NBC. It is the first-ever regular season game at Minnesota’s brand new U.S. Bank Stadium.

One of the bigger storylines — and secrets — of the week was whether Sam Bradford or Shaun Hill would be starting at quarterback for the Vikings. Head coach Mike Zimmer kept quiet on the situation all week, but Bradford was seen taking nearly all of the first-team reps in practice.

And now reports are surfacing that it will be Bradford, acquired from the Eagles when Teddy Bridgewater was injured, under center Sunday evening.

#Vikings QB Sam Bradford is set to make his debut tonight vs. #Packers in Minnesota’s new stadium. This was the plan when they acquired him.

It doesn’t come so much of a surprise considering the Vikings gave up a first-round pick to get the former No. 1 overall pick.

The Packers went on the road last week to defeat the Jacksonville Jaguars 27-23. Quarterback Aaron Rodgers ran for a score and threw 2 touchdowns, including one to Jordy Nelson, who missed nearly all of 2015.

Minnesota also won its opener, doing so at Tennessee with a 25-16 victory. Hill started, but didn’t lead any touchdown drives. The Vikings defense scored twice on turnovers. Running back Adrian Peterson was held to 31 yards on 19 carries.

Green Bay and Minnesota split in meetings a season ago. 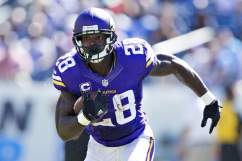 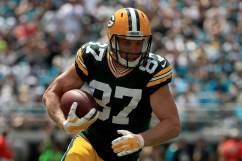 Vikings vs. Packers Live Stream: How to Watch Online