On Tuesday night, the Cleveland Indians will return to the Major League Baseball World Series for the first time since 1997, when they host the Chicago Cubs at Progressive Field. But though the franchise has not taken part in a World Series in 19 years, the Indians have not not won a World Series in far longer than that — 68 years, in fact.

The last time the Indians won a World Series was 1948, when they defeated the Boston Braves (who would move to Milwaukee five years later, then Atlanta in 1966) four games to two. But there was another special aspect about the 1948 Indians team, other than being the last Cleveland World Series champs.

The previous year, Indians then-owner Bill Veeck signed 25-year-old Larry Doby, a star player in the Negro Leagues. That made Doby the first African-American player in the American League and second, after the Brooklyn Dodgers’ Jackie Robinson, in all of baseball.

In 1948, Veeck signed Negro League pitching legend Satchel Paige, making Paige at 42 the oldest rookie ever. But more importantly, when Paige pitched to two batters in Game Five if the 1948 Series, he became the first black pitcher to appear in a World Series game. In Game Four, Doby smashed a round-tripper in third — which can be seen in the video above — making him the first black player to homer in a World Series.

Jackie Robinson had played in the 1947 World Series with the Brooklyn Dodgers, but the Dodgers lost that series to the New York Yankees — making the 1948 Cleveland Indians the first World Series champions to include African-American players, a monumental achievement not only in the history of baseball, but in American history as well.

The country was finally at peace in 1948, with World War II ending three years earlier and the Korean conflict still two years in the future. And while tensions between the United States and the Soviet Union ran high, the first Soviet test of an atomic bomb would not come until 1949.

On the home front, America was still a country with deep racial divisions. President Harry Truman in June of 1948 signed a historic executive order integrating the U.S. armed forces, but the Supreme Court’s Brown vs. Board of Education decision declaring public school segregation unconstitutional was still five years away. Restaurants, hotels and other such facilities remained strictly segregated in large areas of the country — meaning that Doby and Paige were not able to dine or room with their Indians teammates while on the road.

At the movies, the box office was dominated by Humphrey Bogart, who scored two hits with Key Largo and The Treasure of the Sierra Madre, while John Wayne was also at the height of his stardom with the Western box office smash Red River.

As for baseball, the American League saw the tightest pennant race in its history. The Indians and the Boston Red Sox finished the 154-game season in a tie — the first time that had happened — with 96 wins and 58 losses each. The Indians reached the World Series by defeating Ted Williams and the Red Sox in a one-game tiebreaker playoff on October 4 at Fenway Park in Boston, 8-3.

The Indians remained in Boston to start the World Series two days later, against the “other” Boston team, the Braves.

Cleveland’s Game One starting pitcher, Bob Feller, had an off-year for him at age 29 in 1948, winning 19 games after winning at least 20 in his previous five full seasons — though he missed all of 1942 through 1944 and most of 1945 while in military service during World War II.

But while Feller allowed only two hits, in the bottom of the eighth he walked Braves catcher Bill Salkeld to lead off the inning. Then with two outs, Boston’s Tommy Holmes blooped a single into left, scoring pinch-runner Phil Masi. The single run was all the Braves needed, as one of their two ace pitchers, Johnny Sain, threw a four-hit complete game shutout — only the second 1-0 shutout ever in a World Series opener. There have been only three since.

See the full play-by-play and stats from Game One at this link.

Braves fans in 1948 had a saying about their starting rotation, which like all rotations in those days was just four pitchers rather than five. The saying went, “Spahn and Sain and two days of rain!” But while Sain pitched a gem in Game One, Hall of Fame lefty Warren Spahn, who would go on to win 363 games in a 21-year career, didn’t fare as well in the second contest at Braves Field.

The Indians drove Spahn from the game in the fifth inning after reaching him for three runs and six hits. Meanwhile, Cleveland’s 20-game winning Bob Lemon allowed just one run on eight hits as he went the distance.

See full details of Game Two at this link.

Without a day off, as would be common today, the Series shifted to Cleveland Municipal Stadium — which would remain the Indians’ home through 1993 — for the third game. This one would be dominated by pitching as well, as 27-year-old rookie knuckleballer Gene Bearden, who had won the tiebreaker playoff against the Red Sox four days earlier, pitched a complete game shutout.

Indians pitching had now held the Braves hitters, who had averaged nearly five runs per game in the regular season, to just two runs in the first three games of the series. Bearden himself had a pair of hits, including a double, and scored one of the two Cleveland runs.

See all the details including every play of Game Three at this link.

Larry Doby at his Hall of Fame induction ceremony in 1998. (Getty)

Doby’s historic third-inning home run, which was the first homer hit by either team in the ’48 Series, proved to be the game winner after player-manager Lou Boudreaux doubled in left fielder Dale Mitchell in the first inning as Cleveland’s unheralded Steve Gromek — who made 29 relief appearances during the season and only nine starts — somehow outdueled Sain to give the Indians a commanding 3-1 lead in the Series.

But Gromek will be remembered not as much for his surprising performance in Game Four, but for a picture taken in the Indians’ clubhouse after the series was over. In the picture, a gleeful and grinning Gromek was shown hugging an equally elated Doby, cheek to cheek, as the teammates celebrated the Indians’ victory. 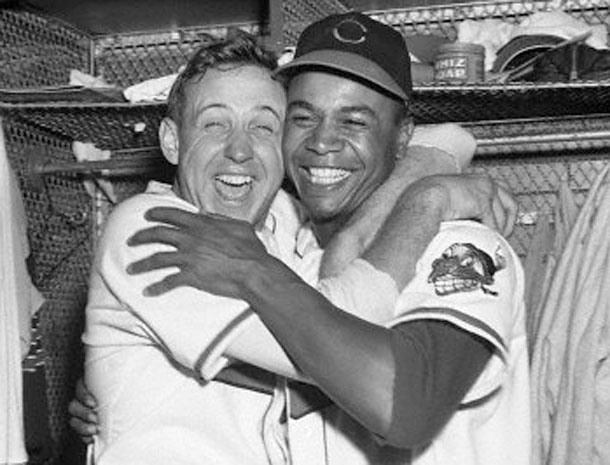 At a time when Doby, Robinson and the few other black players in baseball were subject to torrents of abuse from other players, fans and even their own teammates, the clubhouse picture stood out as a message of unity.

“It seemed in the picture like I was kissing him,” Gromek said years later. “I was being interviewed in front of my locker, and somebody asked Larry to come over. He put his arm around me and squeezed me so hard I thought he was going to break my ribs. We were both so happy.”

Gromek said that people who knew him often asked how he could have allowed the photo to be taken, but Gromek merely shrugged, “That stuff didn’t bother me.”

The picture meant the world to Doby.

“That was a feeling from within, the human side of two people, one black and one white,” he later said. “That made up for everything I went through. I would always relate back to that whenever I was insulted or rejected from hotels. I’d always think about that picture. It would take away all the negatives.”

See all of the plays and stats from Game Four at this link.

The 86,288 people who packed Cleveland Municipal Stadium that Sunday afternoon — setting what at the time was a Major League attendance record — desperate to see their Indians win the team’s first World Series since 1920, left disappointed.

The Braves offense finally exploded, raking Lemon for seven runs on eight hits in 6 1/3 innings, and didn’t treat the Indians’ relief pitchers much better. But history was made again in the top of the seventh when, with one out and the bases loaded, Boudreaux called on Paige to pitch out of the jam.

Facing his opposite number in Spahn, Paige allowed the Braves’ pitcher to hit a sacrifice fly, scoring a run. But then the first African-American pitcher ever to the take mound in a World Series got Tommy Holmes to ground out to short, ending the inning.

Paige was scheduled to bat leading off the bottom of the inning, but Boudreau replaced him with a pinch hitter.

Full stats and info on Game Five are accessible at this link.

Pitching for the third time in six days, Lemon started for Cleveland and struggled through 7 1/3 innings, giving up three runs on eight hits and four walks before Bearden came on to get the final five outs. Watch in the video above as Bearden retires Holmes in a fly ball to left field to clinch what would turn out to the second and last time that the Cleveland Indians won the World Series — at least, possibly, until 2016.

Full stats and play-by-play details of the deciding Game Six can be found at this link.

The Indians went the next 47 years without returning to the World Series. They finally got back to the Fall Classic in 1995. Their opponent? Once again — the Braves. But this time, the Braves were based in Atlanta and they were the ones with the dominant pitching. Greg Maddux, Tom Glavine and John Smoltz, along with Steve Avery, made easily the best starting staff in baseball and one of the greatest of all time. The Atlanta Braves sent Cleveland down to defeat, four games to two. 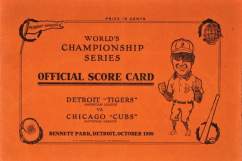 1908 World Series: How the Cubs Beat the Tigers