The Cleveland Indians are once again the kings of the American League after clinching the pennant with an ALCS victory over the Toronto Blue Jays.

It will be Cleveland’s first appearance in the World Series since 1997. The Indians are going for their first title since 1948.

And thanks to online sports retailers Fanatics and FansEdge, you can get the newest Indians A.L. Champions gear to commemorate the historic moment. Pick up a new hat, t-shirt or hoodie to cheer on Cleveland as it goes for a third World Series title in franchise history.

All of the products on Fanatics and FansEdge are officially licensed and made of high quality materials. And not only do the sites carry the Indians American League Pennant apparel, but also have thousands of other Cleveland baseball items for men, women and children, including shirts, jerseys, jackets, hats, hoodies and collectible memorabilia.

Here are some of the brand new Indians 2016 playoffs merchandise available right now:

The Cleveland Indians have taken the American League Pennant, setting up their first World Series appearance in almost 20 years. Pick up the newest Indians t-shirts, hats and hoodies before the Fall Classic gets started by clicking the link below. 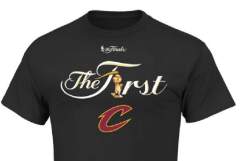 The Indians haven’t won a World Series title since 1948, but with the “Believeland Skyline Pullover Hoodie” you can let everybody know your full support is with Cleveland.

The midweight hoodie is perfect for the autumn temperatures and is made of 80 percent cotton and 20 percent polyester. It features a front pouch pocket and a hood with drawstrings. You can also get the sweatshirt in red (shown) or navy.