Jon Lester will take the mound as the Chicago Cubs’ Game 1 starter on Friday.

The 32-year-old left-handed pitcher brings a nice amount of postseason experience: 16 games, 14 starts, and 98 innings. On top of that, he’s also won two World Series with the Boston Red Sox.

Lester is in the second year of a six-year, $155 million contract he signed with the Cubs in 2014. As Lester starts Game 1 of the NLDS against the San Francisco Giants, here is a look at his life off the field.

In August 2006 Lester was diagnosed with anaplastic large cell lymphoma, a rare, fast-spreading but treatable cancer of the lymph nodes.

Four months later, ESPN reported that Lester’s CT Scan showed no signs of the disease, which appeared to be in remission.

He was on a rehab assignment with the Greenville Drive, the Sox’s Single-A affiliate, in 2007, when he met his wife, Farrah, as MLB.com’s Bruce Lowitt reported:

In August 2006, Lester was 22. He was 15 starts into his rookie season and had won seven of nine decisions. Then, back pain led to a diagnosis of anaplastic large-cell lymphoma. It also is known as a form of non-Hodgkin’s lymphoma.

In other words, cancer. And he beat it. Eleven months later, he was back on the mound, and winning.

But he was single then. He had met Farrah Stone Johnson while rehabbing in 2007. 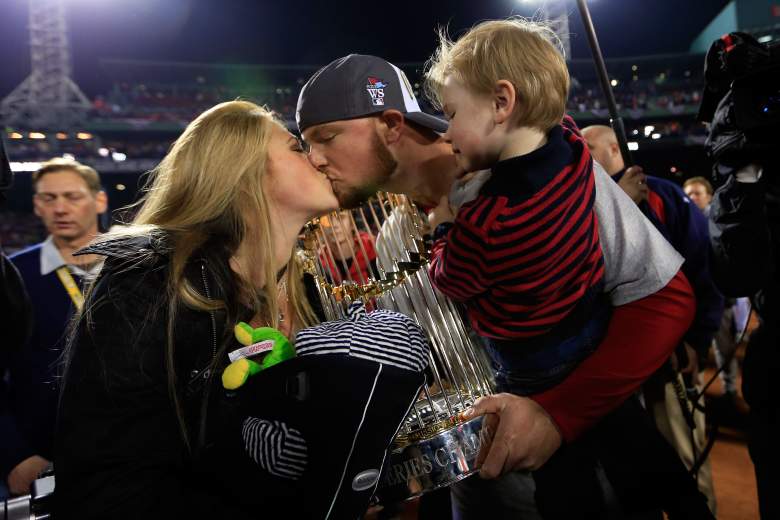 Farrah was a nursing student in South Carolina when she met Jon, according to Fabwags.com.

Less than two years after being diagnosed with lymphoma, Lester started and won the final game of the 2007 World Series for the Red Sox. Lester and Farrah were married on January 9, 2009.

3. Lester & His Wife Have 2 Sons Together

We r so blessed to have you as the provider, leader and ROCK to our family! Happy Father's Day! EEE YOU! @JLester34 pic.twitter.com/t1M8YQm5UF

In the three years following his battle with cancer, life changed significantly for Lester.

“The cancer thing was done and over, and now I met my future wife and got married the next year, winning the World Series, getting an extension here, having a son — the whole deal, it was a fast couple years,” Lester told MLB.com. “I had a lot of good things happen in a short amount of time.”

In July 2010, Farrah gave birth to their first son, Hudson. Their youngest son Walker was born in September 2013, the same year Lester won the second World Series title of his career.

4. The Birth Of His Son Inspired Him to Create His Own Non-Profit

Following Hudson’s birth in 2010, Lester viewed his own battle with cancer through the eyes of a parent.

“You begin to think, ‘What if he gets sick like I did, what we’d go through like what my parents went through,'” Lester told MLB.com in 2012. “You hope it’s something he’ll never have to experience.”

That led him to found NVRQT, it stands for “Never Quit”, and has a simple mission: to strikeout pediatric cancer. The foundation raises awareness and funds for pediatric cancer research.

“Once your son comes into the world and you look at him and imagine him to go through what I went through, it’s heartbreaking,” Lester said, according to the article.

“That was another reason for me getting involved with this. I couldn’t imagine him being in a hospital bed getting the drugs I got. Any way that we can help raise money so kids can get this treatment as painless and easy as possible, the better.”

Through his foundation, Lester is encouraging a nationwide effort to host local NVRQT Games in honor of children who have been sidelined by cancer.

5. Lester’s Father Was Diagnosed With Cancer in 2008

Great day fishing with my dad. He got the biggest red catch of the day. pic.twitter.com/4xeUvnQ9xz

Lester and his father, John have always had a close relationship. However, they now share a bond over unfortunate circumstances: cancer.

In 2008, Lester’s father was diagnosed with lymphoma– two years after his own diagnosis.

“Usually your parents get it before you do or whatever it may be if you get it,” Lester said to ESPN. “He definitely remembers some of the times I had and how I approached everything and he tries to do it the same way.”

He explained the cancer is “slow growing, … something [his father] will die with, not die from.”

Lester told ESPN his father was always proud of him, but had a stronger level of understanding after experiencing what he went through first hand. “He’s more proud of me on another level.”

Lester has learned how powerful sharing his story can be to others who are battling cancer or other live-threatening diseases.

It took me a good two years to figure that out, to know that if somebody has cancer or had cancer or a family member had cancer, they just want to come up to you, shake your hand and say, ‘Thank you.’ They want to talk to you about it. If it helps them, how easy is that?