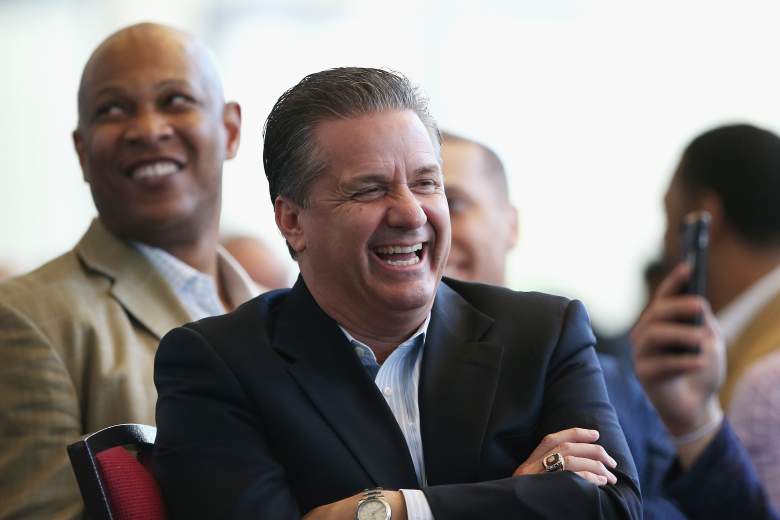 Kentucky head coach John Calipari has been ahead of the curve in multiple areas since taking the helm at one of the sport’s most storied programs in 2009, one of which being the decision to start holding a combine for his players prior to the start of the season. This marks the third consecutive year in which Kentucky has held a preseason combine, and the head coach has some special sneakers for the occasion.

Sunday afternoon Calipari shared some photos of the custom Nike Air Force 1 sneakers via his Twitter account, and the shoes have some noteworthy features.

Got a special pair of shoes I'm wearing tonight. First names of all 30 guys who've gone to the NBA over the last seven years are on them. pic.twitter.com/ywSWnjvAMw

The shoes feature six panels with all 30 guys on them. Here are the first three: pic.twitter.com/7c6d3bneOZ

And here are the other three panels: pic.twitter.com/mXJdLQwG7A

Of course there’s the wildcat and interlocking “UK” logos on the outer heels of the sneakers and the blue and white checkerboard throughout the sneaker, but the most noteworthy feature are the names. As Calipari notes in one of his tweets the first names of all 30 players who have been selected in the NBA Draft since his arrival in Lexington are prominently featured on the shoe.

Included in that group of players are three first overall selections (John Wall, Anthony Davis and Karl-Anthony Towns) and 11 other lottery picks.

Those names aren’t a reminder for the 90 NBA scouts and executives, representing all 30 teams, who are in attendance. They know all about the talent Calipari’s coached in Lexington, which is why they all made the trip and the combine’s being shown on ESPNU. The fashion statement is for the recruits who, if they aren’t watching the combine, will at least see the photos of the sneakers.

And given the caliber of player that Kentucky recruits, showing off how many have made the leap from Kentucky to the pro ranks can make quite the impression when looking to put together another highly regarded recruiting class.

Kentucky’s decision to hold a preseason combine has led to other programs following suit. Last year LSU, which at the time had eventual top overall pick Ben Simmons, held a combine and Duke will hold two this season before closing their practices to NBA executives for the remainder of the season. Duke has consistently competed with Kentucky for the top spot in the recruiting rankings in recent years, with Duke having the top classes in the country in 2014 and 2016 and Kentucky grabbing the top spot in 2015.

These aren’t the first pair of custom Air Force 1 sneakers that have been made for Calipari either. Last fall his son Brad, who’s a freshman on this year’s team, gave him a pair to commemorate Calipari’s induction into the Naismith Memorial Basketball Hall of Fame.