Wednesday's NBA schedule is a robust one, with 13 games on the slate and high-priced FanDuel options such as Anthony Davis, Russell Westbrook and James Harden ($11,600 each) all available for selection. In total seven players in action Wednesday night have salary values of $9,500 or higher, with DeMarcus Cousins ($10,000) have a five-figure number and three others just below that. But given the number of talented options in the $7,500-$9,500 range, should FanDuel players hitch their wagon to one star when there's the chance to add a couple high-level options at lower prices?

That's something FanDuel players deal with on a nightly basis, but given the number of games tonight it will likely be a better strategy to go with the latter approach. In regards to the players with the highest price tags, Davis is listed as a game-time decision (knee) and both he and Westbrook played on Tuesday. In the case of Davis, it would be wise to entertain the possibility of picking Terrence Jones ($5,100), who's played well of late and saw an increase in minutes alongside Davis.

Here are our picks for Wednesday's games, working within the FanDuel rules of a nine-player roster and a $60,000 salary cap. (Getty) 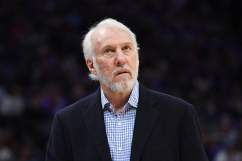