Most fans would probably sit down to watch football on Thanksgiving no matter who's playing, but the 2016 schedule offers a compelling trio of games. Up first, the Detroit Lions at Minnesota Vikings. Say what you want about the quality of each team, but this is for first place in the NFC North, and the first meeting between these squads resulted in an entertaining overtime battle. The next game pits the Dallas Cowboys, who have won nine straight and captured the best record in the NFL, against the Washington Redskins, who have quietly lost just one game in the last two months. This could be the Game of the Week, let alone the Game of Turkey Day. The final contest of the night, the Pittsburgh Steelers vs. Indianapolis Colts, suddenly looks a lot less intriguing with Andrew Luck unexpected to play, but it still could turn into a high-scoring affair. If you're looking to mix in some sports betting with your family time, you can click through the gallery for my picks against the spread for each Thanksgiving game. Note all odds are courtesy of OddsShark. (Getty) 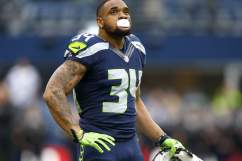 Read More
NFL
Thanksgiving Day odds, lines, predictions and picks against the spread for the trio of NFL games.