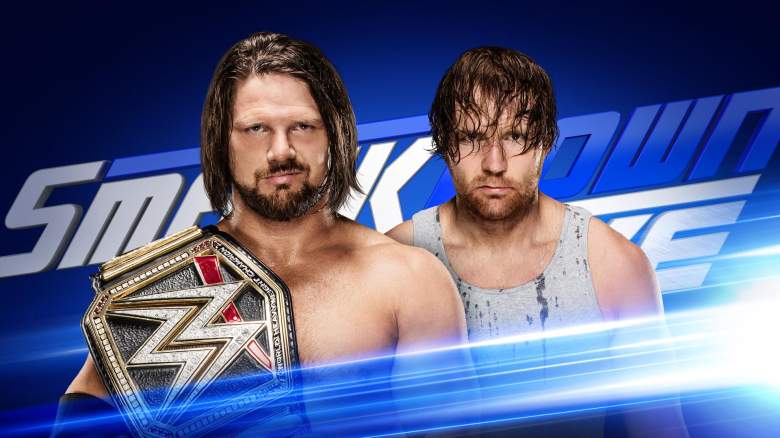 Tonight on SmackDown Live, the fallout of Sunday’s Survivor Series pay-per-view must be dealt with. The men’s team gets to celebrate a victory over Raw, while the women’s team must grapple with their failure at the hands of Charlotte and Bayley. Plus, The Miz gets to continue his never-ending Intercontinental Championship world tour. The show begins tonight at 8:00 p.m. Eastern Time on the USA Network, broadcast live from Ottawa, Ontario. Read on for match results and spoilers, followed by a preview of the night’s events written earlier this afternoon.

8:00 – Shane McMahon enters. He apologizes for not being his normal energetic self, saying he feels like he’s been in a car accident after Survivor Series. He also gives a shout out to Team Raw: Chris Jericho, Kevin Owens, Braun Strowman, Seth Rollins, and Roman Reigns. He also thanks Team SmackDown‘s sole survivors, Randy Orton and Bray Wyatt. On the other hand, Dean Ambrose and AJ Styles couldn’t put their differences aside even for an hour.

Dean Ambrose enters, asking Shane why he’s so low energy. After all, Team SmackDown was victorious at Survivor Series. But Shane says that Ambrose had no idea whether him attacking AJ Styles would cost them match. Ambrose changes the subject and welcomes out James Ellsworth, the man who took down Braun Strowman.

James Ellsworth enters wearing a neck brace. Ambrose tells everyone that Shane has a big surprise for Ellsworth, though Shane didn’t want to reveal that in public. Ambrose reveals the surprise for him: Ellsworth is receiving a SmackDown Live contract. On the other hand, Shane tells Dean Ambrose he has the night off since he has been so out of control lately. In fact, he needs to leave the building, and he needs to do it right now.

AJ Styles enters, staring down Dean Ambrose as he walks out. Styles asks when SmackDown Live became the land of undeserved opportunity. After what Dean Ambrose did, he needs to be fired from SmackDown Live entirely, Styles says; he also no longer deserves a title opportunity. Styles goes on to question Shane’s decision to give James Ellsworth a contract, saying Ellsworth has not earned it. If he wants to prove he deserves the contract, Ellsworth should face Styles tonight in a ladder match with the contract being at the top of the ladder, Styles says. Shane tells Ellsworth to ignore Styles, but Ellsworth accepts the challenge, saying he’s already beaten Styles twice. Ellsworth adds that if he wins, not only does he want a contract, but he also wants a future title opportunity.

8:16 – Backstage, Daniel Bryan tells The Miz that he humiliated SmackDown Live by cheating to win his match at Survivor Series. The Miz’s punishment is that he will face Kalisto with the Intercontinental Championship on the line next.

8:23 – The Miz defeats Kalisto in a match with the Intercontinental Championship match on the line. Kalisto mainly loses because Baron Corbin interferes and attacks him. After the match, Dolph Ziggler attacks The Miz.

8:34 – Backstage, Alexa Bliss asks Shane McMahon when she’s getting her rematch against Becky Lynch. Lynch enters and tells Bliss she’ll get her match at TLC in two weeks. Natalya enters and begins trash talking Becky Lynch, inspiring Shane McMahon to schedule a match between the two of them. At the end of the segment, Dean Ambrose enters carrying a box of pizza.

8:44 – Backstage, Daniel Bryan punishes Baron Corbin by setting him up in a match against Kane to take place later tonight.

8:45 – A tag team turmoil match takes place. It starts off with The Hype Bros eliminating The Ascension. Breezango then eliminates The Hype Bros, but American Alpha eliminates Breezango, The Vaudevillains and the Usos.

9:10 – Backstage, James Ellsworth prepares for his match later, and Dean Ambrose comes back into the arena yet again.

9:36 – Backstage, Nikki Bella confronts Carmella, believing that she was the one to attack her at Survivor Series. Carmella denies this.

9:50 – James Ellsworth defeats AJ Styles in a ladder match, with his WWE contract at the top. In part this is because Dean Ambrose intervenes, but actually, Styles takes out Ambrose almost immediately, and Ellsworth wins when he tips the ladder over with Styles on it. He then climbs up and grabs the contract.

At Survivor Series on Sunday, Team SmackDown was able to prevail over Team Raw in the men’s elimination match, largely thanks to the work of Randy Orton and Bray Wyatt. But during the match, Dean Ambrose betrayed his team when he worked with Seth Rollins and Roman Reigns to take out AJ Styles. With Ambrose’s shot at the title being a few weeks away, will he suffer any consequences for his actions? And speaking of consequences, what is to come for James Ellsworth, who once again interfered in a match he was supposed to stay on the sidelines for?

Viewers will recall that last week, The Undertaker made an appearance and told Team SmackDown that they better win at Survivor Series, otherwise there will be hell to pay. Luckily for everyone on the SmackDown roster, they were up to the task and therefore won’t have to suffer The Undertaker’s wrath, but might The Deadman still make an appearance tonight and take issue with some of Team Blue’s actions?

Also at Survivor Series, The Miz defended his Intercontinental Championship, but he only won because he once again cheated by having Maryse step in. Daniel Bryan openly dislikes The Miz, so might he finally take action against him for continuing to cheat his way to the top? Or will The Miz’s illegal actions go unpunished? Speaking of the Intercontinental Championship, where does Dolph Ziggler go from here? Ziggler put everything on the line in order to take the title for himself, only to lose it less than a month later.

In terms of the women’s division, that elimination match at Survivor Series ended in a victory for Team Raw, and so the female superstars will show their disappointment tonight. Nikki Bella will also want to identify the mysterious person who attacked her before the match, and Alexa Bliss will presumably demand that Daniel Bryan schedule her rematch with Becky Lynch that she has been waiting for. Might anyone else go after the title as well?

Finally, the tag-team elimination match was won by Cesaro and Sheamus, much to the chagrin of Team Blue. But with Survivor Series in the past, who will come after Heath Slater and Rhyno’s title? Will Slater’s kids soon be in jeopardy once again?