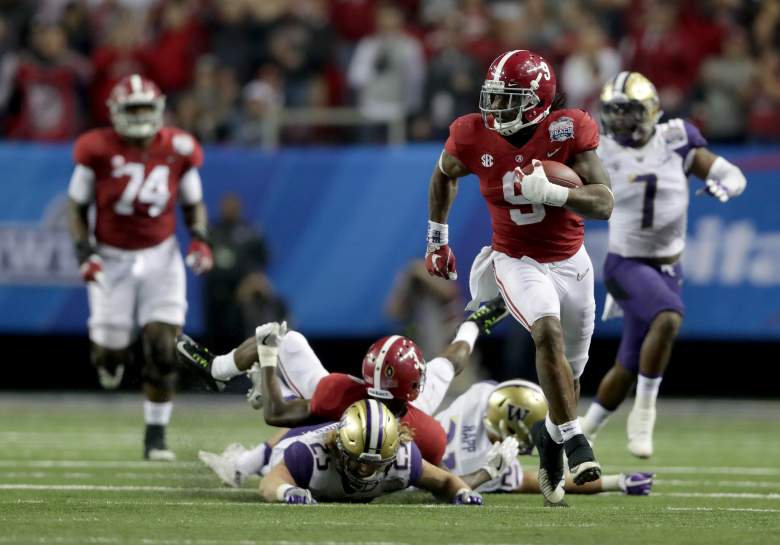 The top-ranked Alabama Crimson Tide are now one win away from their second consecutive national title, as they defeated No. 4 Washington in the Chick-fil-A Peach Bowl by the final score of 24-7. Nick Saban’s team was dominant defensively, limiting Washington to 194 total yards, and a standout performance from running back Bo Scarbrough salvaged what was a mediocre afternoon on the offensive side of the football. Scarbrough rushed for 180 yards and two touchdowns on 19 carries, with his 68-yard touchdown run in the fourth quarter sealing the outcome.

Alabama’s other touchdown was scored by linebacker Ryan Anderson, who returned a Jake Browning interception 26 yards to give the Crimson Tide a 17-7 lead in the final minute of the first half. Browning completed 11 of his first 13 passes, but nine of the completions were for ten yards or less, and he finished 18-for-32 for 122 yards, one touchdown and one interception. Alabama quarterback Jalen Hurts was even worse throwing the football, completing seven of his 14 attempts for 57 yards. But he ran for another 50 yards, and Alabama’s combination of Scarbrough and a stingy defense that won the field position battle was more than enough in the end.

Below are quick recaps of most of the drives in Saturday’s game, with highlights of the scoring plays mixed in. Next up for Alabama is No. 2 Clemson in the College Football Playoff title game January 9 in Tampa, Florida. The two teams met in last year’s title game, with Alabama winning 45-40.

(11:57 remaining, first quarter): Washington began the opening drive of the game on its own 12 yard line, going seven yards in three plays before being forced to punt. Tristan Vizcaino managed to flip the field with a 68-yard punt that was allowed to roll inside of the Alabama 20. The Crimson Tide also went three and out on their opening drive, with the Washington defense holding up its end of the bargain.

(8:40 remaining, first quarter): A Jake Browning scramble on 3rd and 6 moved the sticks for Washington, and they followed that up with a throwback screen pass to running back Myles Gaskin for another first down at the Alabama 28. How Washington does with misdirections and screen plays could have a significant impact on the outcome, but even with those plays the Huskies will need to stay committed to running the football against the nation’s best run defense.

(8:01 remaining, first quarter): The Huskies strike first, with Browning connecting with wide receiver Dante Pettis for a 16-yard touchdown pass. Pettis beat Alabama corner Marlon Humphrey with a stutter step that the redshirt sophomore corner bit on, and Browning dropped in the pass over Pettis’ outside shoulder.

(5:01 remaining, first quarter): The Crimson Tide have offered up a solid response, scoring on an 18-yard Bo Scarbrough touchdown run. Alabama’s first big play of the drive was a Jalen Hurts pass to tight end O.J. Howard for 16 yards. From that point forward the Crimson Tide went with the faster tempo at which the offense has worked best this season, with Hurts, Damien Harris and Scarbrough all hurting the Washington defense on the ground.

(2:22 remaining, first quarter): A John Ross fumble was recovered by Alabama at the Washington 40, and the Crimson Tide have been very good this season when it comes to converting turnovers into points. Faced with a 3rd and 1 at the Washington 10, Alabama lost five yards due to a false start penalty. After failing to convert on 3rd and 6, Alabama has to settle for a field goal attempt to begin the second quarter.

(14:55 remaining, second quarter): Adam Griffith, who entered the game 13-for-26 in his career on kicks of 40 yards or longer, made a 41-yard field goal to give Alabama their first lead of the game. The Alabama defense forced a three and out, with Washington’s plays on second and third down both going for losses. Getting behind the sticks in any game, much less one of this magnitude, can be trouble.

(9:03 remaining, second quarter): After allowing one first down, the Washington defense forces an Alabama punt. Washington’s front four has held its own against Alabama’s offensive line, which isn’t a major surprise given how well they’ve played all season long. Washington has the ball back, and they’ll be looking for greater production from an offense that has been quiet outside of their second drive of the game.

(7:28 remaining, second quarter): Another three and out for Washington, as their offensive line is having trouble against the Alabama front four. Browning’s 11-for-14 thus far, but the majority of his completions have been for ten yards or less. Washington’s still only down three points, but they need their front five to begin winning battles against Jonathan Allen and company if they’re to put up the points needed to win the game.

(5:56 remaining, second quarter): Washington’s front four steps up again, forcing a three and out with the Crimson Tide beginning their drive in Husky territory. Being able to devote their entire back seven to defending pass-catchers has helped Washington defend Hurts, with the linemen getting enough pressure on him to keep the freshman from truly getting settled in the pocket.

(5:20 remaining, second quarter): Washington’s gone away from the run, and it’s having a negative effect on their ability to move the ball. Washington went three and out, with a friendly bounce on the resulting punt making Alabama begin their drive just a few yards short of midfield.

(2:16 remaining, second quarter): After two nice gains on the ground by Scarbrough, an intentional grounding penalty took away any momentum gained on that drive by Alabama. The Crimson Tide would eventually punt, pinning Washington inside of their own five-yard line for the upcoming drive.

(1:13 remaining, second quarter): Browning’s first interception in his last 114 attempts was a costly one, as linebacker Ryan Anderson returned the pick 26 yards for a touchdown. Reuben Foster’s pressure forced the bad pass, and Anderson’s touchdown is the 15th non-offensive score for the Crimson Tide this season (11 defensive, four special teams).

Halftime: The first half comes to an end with Alabama up by ten. Neither offense has been able to establish much outside of their respective touchdown drives, with Alabama winning the field position battle and getting a defensive touchdown by way of linebacker Ryan Anderson’s interception. Neither quarterback has been able to make much of anything happen via the air, with Browning throwing for 83 yards and Hurts 32. Alabama’s been better on the ground, with Scarbrough running for 80 of their 106 rushing yards on just nine attempts.

(12:10 remaining, third quarter): After a 33-yard run by Hurts on first down moved Alabama into Washington territory, penalties ground their drive to a halt. Washington’s defense has held its own, but they’ve also had some help in the form of Alabama not being as sharp as they’ve been for most of the season to this point. Alabama’s punt went into the end zone for a touchback, which will help Washington some when it comes to their field position woes.

(10:04 remaining, third quarter): After two Gaskin runs for a total of four yards, Browning was sacked on third down to force yet another Washington punt. Vizcaino got another quality bounce on his punt, resulting in a 52-yard punt. Washington tried to get something going on the ground in their first drive of the second half but they were unable to, and in a passing down the line (with Gaskin staying in the backfield to help) could not keep Alabama’s defenders from getting to Browning.

(6:05 remaining, third quarter): Another drive ended by mistakes for Alabama. The Crimson Tide committed a couple untimely penalties, and they were also fortunate to retain possession after Hurts fumbled the football. Washington’s Psalm Wooching had an opportunity to recover the fumble and give the Huskies a much-needed boost, but the football slipped out of his hands and was recovered by an Alabama offensive lineman.

(4:31 remaining, third quarter): Washington once again goes three and out, with Browning not being ready for the snap on 3rd and 6 (an Alabama defender simulated Browning’s clap, resulting in the center snapping the ball), forcing yet another Vizcaino punt. Alabama will begin their next drive at the Washington 48, and at this point Washington needs their defense to force a turnover if they’re to make any progress.

(2:32 remaining, third quarter): Washington’s defense didn’t force a turnover, but they did get off the field quickly as they forced another three and out. With a holding penalty tacked on, Washington has their best starting position of the game at their own 30-yard line.

(14:50 remaining, fourth quarter): Washington failed to convert on 3rd and 3, but Browning’s 50-yard quick kick pinned Alabama at their own two-yard line. The Huskies didn’t get points, but they did put their defense in a spot where they could possibly make a play.

(11:56 remaining, fourth quarter): After runs by Harris and Hurts that gained a total of one yard, Alabama gave the ball to Scarbrough on 3rd and 9 from their own three and he moved the chains. A few plays later Scarbrough likely put the final nails in the coffin, breaking free for a 68-yard touchdown run. Scarbrough’s now up to 175 yards and two touchdowns on just 14 rushing attempts. He’s been their “closer” all season long, punishing defenses that have been worn down throughout the course of the game, and that is once again the case.

He ran through the entire defense! https://t.co/FGF82KATzv

(8:13 remaining, fourth quarter): In need of a significant answer Washington musters just one first down before having to punt yet again. The Huskies simply cannot get anything going on offense; the running game was essentially abandoned in the second quarter, and Browning doesn’t have the time needed to let receivers get down field. Also, those receivers are having a hard time getting open against the Alabama defensive backs. Nick Saban is well-positioned to move his career record at the Georgia Dome to an impressive 13-1.

(7:20 remaining, fourth quarter): Alabama goes three and out, gaining just one yard on a Scarbrough run on second down. Can Washington find any kind of spark offensively? Given how the first nearly 53 minutes have gone, it’s tough to say that they can. 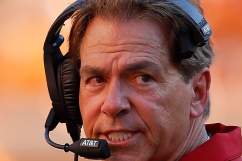 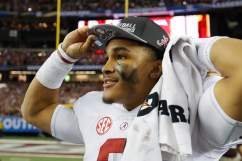