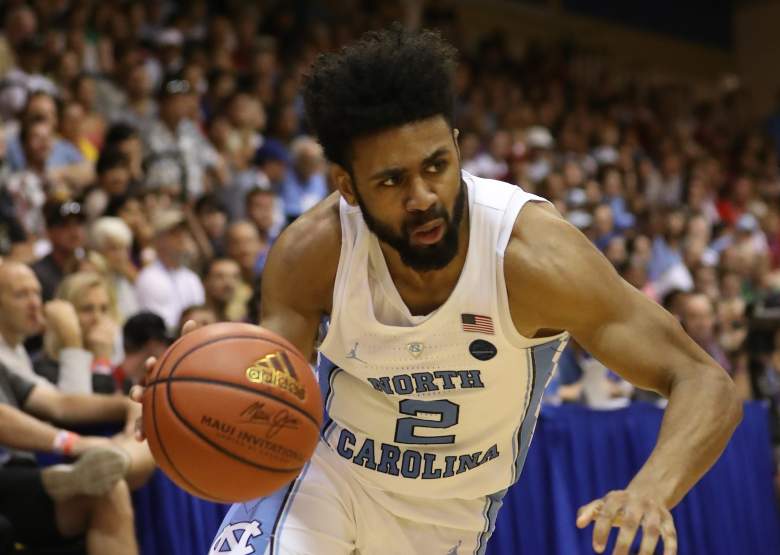 With many schools across the country wrapping up final exams, the college basketball schedule will begin to produce better matchups as conference play approaches. That’s certainly the case this weekend, with a number of high-powered games matching some of the best teams in the country. While No. 6 Kentucky faces No. 7 North Carolina in the best game of the weekend at the CBS Sports Classic in Las Vegas, the best in-season event of the weekend is the Crossroads Classic doubleheader in Indianapolis.

Here are our picks for the five best games of the weekend (and one bonus pick), preceded by links to the full schedules for Saturday and Sunday.

The game of the weekend will be played in Las Vegas as part of the CBS Sports Classic, with No. 2 UCLA and Ohio State meeting in the first game of the day. Both North Carolina (10-1) and Kentucky (9-1) have rosters capable of making a deep run in March/April, but in the case of the Tar Heels they won’t have their full rotation available.

Junior wing Theo Pinson remains out due to a broken fifth metatarsal in his right foot suffered in October, but he was optimistic with regards to when he could return following the team’s win over Radford earlier this month. The other injury concern for North Carolina is the sprained left ankle suffered by starting point guard Joel Berry II during that win over Radford. Berry’s missed the last two games as a result, but he will be back Saturday as the school announced that he’s been cleared to play.

Offensively, North Carolina averaged 78 points per game in the two contests Berry missed, but the offense wasn’t the issue for Williams’ team. The issue was on the defensive end, where Berry could hound opposing point guards and keep them from getting their teams’ offense going. North Carolina allowed 74 points to Davidson and 71 to Tennessee without Berry, with Davidson’s Jack Gibbs going off for 30 points in his team’s defeat.

As for Kentucky, their defense was expected to serve as the catalyst to their offense before the season began and that’s how things have played out. John Calipari’s team is currently ranked 22nd in turnover percentage, forcing turnovers on 23.3 percent of their opponents’ possessions per KenPom.com, and they’re also sixth in three-point percentage defense (28.6 percent) and second in block percentage (19.0 percent) nationally. Guards De’Aaron Fox, Malik Monk and Isaiah Briscoe lead the way on the perimeter, with freshman Bam Adebayo serving as the anchor in the middle. Kentucky’s perimeter shooting, outside of Monk and senior forward Derek Willis, is still a question mark, but they’ve got more than enough talent to rack up wins.

PICK: North Carolina by 4 (updated line was even). In Kentucky’s lone defeat of the season, UCLA shot 58.1 percent from two. North Carolina, with Isaiah Hicks, Kennedy Meeks and even freshman Tony Bradley, has the front court personnel to make things difficult for Kentucky in the paint.

The second half of the Crossroads Classic doubleheader sets up to be an interesting affair, with turnovers possibly being the deciding factor. For as good as the Hoosiers (8-1) have been offensively this season their one issue has been taking care of the basketball, as they rank 314th nationally in turnover percentage (22.2 percent) per KenPom.com. A large part of that should be attributed to the team getting used to life without point guard Yogi Ferrell, and the use of a “committee” to initiate things offensively with Josh Newkirk, James Blackmon Jr. and Robert Johnson among the options. Butler (9-1) isn’t a full-court pressure kind of team, but Chris Holtmann’s squad makes life difficult for the opposition and is forcing a turnover on 23.3 percent of its defensive possessions.

Turnovers will be one area to watch, as well as the impact that Indiana wing OG Anunoby can have in his first game back from an ankle injury that cost him three games following the win over North Carolina. His versatility as a defender will be key for defending a player the caliber of Butler’s Kelan Martin, who’s averaging 17.7 points and 4.3 rebounds per game. How much Anunoby can play remains to be seen, but his return comes at a good time for Indiana.

PICK: Butler +4.5. Per OddsShark, Indiana is listed as a 4.5-point favorite, but the KenPom.com projection is that Indiana wins by a point. Go with that prediction here.

The Indiana vs. Butler game at Bankers Life Fieldhouse will be preceded by this matchup, with Notre Dame (9-1) one week removed from falling short in their effort to knock off No. 1 Villanova. While Villanova didn’t have a marquee big man for Notre Dame to deal with, Purdue (8-2) has two in junior Isaac Haas and sophomore Caleb Swanigan. Swanigan’s off to an excellent start to his second season in West Lafayette, averaging 15.9 points, 11.2 rebounds and 3.4 assists per game. With the 7-foot-2 Haas averaging 14.8 points and 5.3 rebounds per night, Purdue head coach Matt Painter is getting 30.7 points and 16.5 rebounds per night from those two.

Where things get tough for Notre Dame in defending those two is the fact that they don’t have a great deal of size inside, with Bonzie Colson being just 6-foot-5 (but incredibly tough). With that being the case Mike Brey’s team will look to force mismatches with its numerous perimeter options, led by V.J.Beachem, who can both break defenses down off the dribble and hit perimeter shots. Guard Matt Farrell played very well against Villanova, and he’ll be asked to do the same against a Purdue backcourt that while still having some issues with turnovers ranks among the best in perimeter shooting (fifth nationally in three-point percentage). The old boxing adage of “styles make fights” applies here, in what should be an entertaining matchup in Indianapolis.

PICK: Purdue -2. Notre Dame’s guards and wings can be a handful, but with players such as P.J. Thompson, Carsen Edwards and Dakota Mathias it isn’t as if Purdue doesn’t have quality guards of its own. Where Purdue can hurt Notre Dame is with their big men, and that will be the difference in the end.

Arizona (9-2) has managed to deal with injuries (Talbott Denny, Ray Smith and Parker Jackson-Cartwright) and the absence of Allonzo Trier in the early going, with their only losses coming against two ranked teams in Butler and Gonzaga. Saturday afternoon in Houston they’ll face a Texas A&M team that boasts one of the top front courts in the country, with sophomore Tyler Davis being joined by fellow sophomore D.J. Hogg, senior Tonny Trocha-Morelos and freshman Robert Williams in the rotation. Billy Kennedy’s big men play a physical brand of basketball in the post, and in Hogg they’ve got a 6-foot-8 forward who does most of his damage on the perimeter. But outside of Ray Smith’s knee injury, Arizona’s depth has been hurt more on the perimeter than in the paint.

Freshman Lauri Markkanen has looked like a possible lottery pick, with his ability to step away from the basket and hit shots while also on occasion beating defenders off the dribble. Senior Dusan Ristic is also 7-feet tall, with junior college transfer Keanu Pinder and sophomore Chance Comanche providing depth off the bench. Guards Rawle Alkins and Kobi Simmons have played well as freshmen, but the concern for the Wildcats is how well they execute offensively without their one true point guard (Jackson-Cartwright). Senior Kadeem Allen has performed well, but there are still times when things get bogged down offensively for the Wildcats.

PICK: Texas A&M -2. OdddShark lists the Aggies as a slight favorite, with the proximity of Houston to College Station likely being a factor. But it should be noted that Texas A&M also has some issues to work out on the perimeter, with sophomore Admon Gilder and senior JC Hampton having the responsibility of leading the team.

Mark Few’s Bulldogs (10-0) are one of six remaining undefeated teams in college basketball, and a look at the talented roster reveals exactly why. Gonzaga has an answer for just about anything that an opposing team can throw at them. On the perimeter Josh Perkins and Nigel Williams-Goss are the team’s leading scorers, with Jordan Mathews providing perimeter shooting. And in the front court the Bulldogs are incredibly deep, with Przemek Karnowski being a mountain of a man in the middle and Jonathan Williams, Zach Collins and Killian Tillie all in the rotation as well. But if there’s something to watch for in this game, it will be how well Gonzaga takes care of the defensive glass.

Gonzaga’s opponents are rebounding 32.9 percent of their missed shots according to KenPom.com, a number that ranks 279th nationally. That number’s a bit surprising when considering the aforementioned options in the front court, and Tennessee (6-4) is a good offensive rebounding team as they’ve grabbed 33.6 percent of their misses. Rick Barnes has a team that will compete for 40 minutes, and it could be argued that they let North Carolina off the hook last Sunday in Chapel Hill. This game, which will be played in Nashville, represents a significant opportunity for the Volunteers as they’ve lost to North Carolina by two and to Oregon by four (in overtime) this season. They’ll be without forward John Fulkerson (elbow), but fellow freshman Grant Williams and junior Robert Hubbs will be available to lead the way.

PICK: Gonzaga straight up, but Tennessee +13 against the spread. The Bulldogs simply have too many bodies, especially in the front court against a Tennessee team that was already lacking size with Fulkerson in the fold.

Old foes get together at the Carrier Dome on a day in which Syracuse (6-3) will honor the late Pearl Washington. With the programs entering their fourth year removed from sharing the same conference (the Big East), this rivalry has taken on an entirely different tenor with it being just as much about “nostalgia” as it is “animosity.” As for this particular season, both teams are in need of a win with the Hoyas (6-4) also losing Isaac Copeland to transfer earlier this week.

Georgetown’s won four straight since starting the season 2-4, with the best win coming against La Salle, and they could use a win for their non-conference profile. The same can be said for the Orange, with its three defeats coming against South Carolina, Wisconsin and UConn. The key for Syracuse will be to get sophomore forward Tyler Lydon going; they need him to be “greedier” offensively and take more shots in order to be at their best. As for Georgetown, Rodney Pryor and company will need to continue to get to the foul line as opposed to firing up the “fool’s gold” three-pointers that Syracuse likes to see their opponents take against the 2-3 zone.

PICK: Georgetown +8. Look for Syracuse to win the game, but having this at a time when the students aren’t on campus could hurt the atmosphere some. Plus, this doesn’t feel like a matchup where one team will run away with the victory. 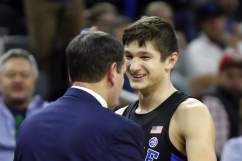