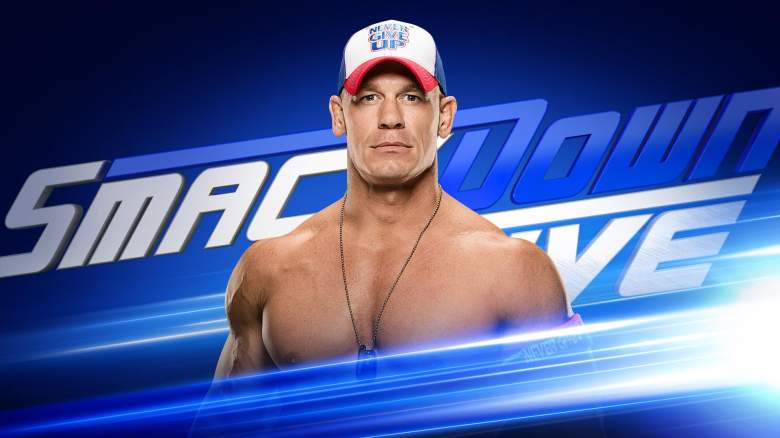 Tonight on SmackDown Live, John Cena returns after a two-month absence. What will Cena have to say to the WWE universe? And how will the face of never giving up explain away the fact that he apparently gave up after losing to AJ Styles at No Mercy? Plus, three championship matches will take place, with the World Championship, Tag Team Championship, and Women’s Championship all on the line. Which titles, if any, will change hands? The show will begin tonight at 8:00 p.m. Eastern Time on the USA Network. Read on for match results and spoilers, followed by a preview of the night’s events written earlier this afternoon.

8:00 – John Cena enters and is welcomed back with a “John Cena sucks!” singalong from the audience. Cena is excited to be back and says that there’s nothing like the excitement of the WWE universe. He adds that because Chicago is a place of champions, there will be three championship matches tonight, with the World Championship, Tag Team Championship and Women’s Championship on the line. Cena polls the crowd on who they want to win the World Championship, and just about everyone is on AJ Styles’ side.

So, Cena asks himself, what’s he doing here? The crowd chants “Undertaker!” Cena says that 2016 wasn’t a great year for him, but tonight, he’s here to set the record straight: he isn’t done, and he isn’t leaving anytime soon. When you’re knocked down, you get back up and keep kicking ass, Cena says, and so he challenges the winner of tonight’s main event to a championship match at the Royal Rumble.

8:16 – Backstage, The Miz says he refuses to be interviewed tonight by anyone other than the unprofessional journalist Renee Young.

8:49 – Backstage, Dolph Ziggler says in an interview that putting his title opportunity on the line last week may not have been the best idea. However, he says that tonight he might finally be able to defeat the odds and become World Champion.

8:51 – In a backstage interview, James Ellsworth says that people making fun of him sometimes brings him down. Carmella enters and says that she finds Ellsworth uniquely attractive. They walk off together.

9:16 – Backstage, Renee Young goes to see The Miz outside his dressing room. She is clearly upset that she has to talk to him and asks him a generic question. As he’s answering, Dean Ambrose appears and attacks The Miz.

9:23 – Backstage, Nikki Bella says that the more success you achieve, the more people want to knock you down. She is asked to respond to Natalya’s betrayal, but Bella says she will save her comments so she can say them to Natalya’s face.

9:24 – Backstage, Baron Corbin says that he should have been recognized as a main event talent long ago and that AJ Styles and Dolph Ziggler are about to see their last days with the WWE.

9:25 – AJ Styles defeats Dolph Ziggler and Baron Corbin in a triple threat match, retaining his World Championship. At one point, AJ Styles and Dolph Ziggler actually work together to take out Baron Corbin, performing an incredible two-person table dive meant to take Corbin out. However, that alliance doesn’t last very long, with Styles and Ziggler fighting one another immediately after this spot. At the end of the match, Baron Corbin seems ready to pin Dolph Ziggler and score a victory. However, Styles comes out of nowhere to attack Corbin and pin Ziggler himself.

9:58 – As AJ Styles stands in the ring with his championship, John Cena enters and stares Styles down. But he then extends his hand and congratulates Styles on the victory. Styles is extremely hesitant, assuming Cena has some trick up his sleeve, but he eventually shakes Cena’s hand as the show ends.

John Cena returns to SmackDown Live this evening after taking a hiatus to film his reality series, American Grit. Cena has been feuding with AJ Styles, the WWE World Champion, for several months now, and the two had a match back at SummerSlam back in August. Styles emerged victorious, and a humiliated Cena took off his “never give up” armband and disappeared. He returned a few weeks later to challenge Styles to another championship match, and so Cena faced Styles (and Dean Ambrose) at No Mercy in October. Once again, Cena lost. He still clearly wants another title run, so how will Cena be able to take on AJ Styles after two humiliating losses?

Meanwhile, AJ Styles will be a bit busy tonight defending his World Championship. Last week, Daniel Bryan announced that The Phenomenal One would be facing Dolph Ziggler and Baron Corbin in a triple threat match with the World Championship on the line. This occurred after Corbin and Ziggler clashed over who should get a shot at the title, with Corbin saying that Ziggler has been given far too many chances this year. Will AJ Styles be able to hold on to the World Championship? Could we actually enter 2017 with Dolph Ziggler or Baron Corbin as the new champ that runs the camp?

That’s the first of three title matches taking place tonight, with the second being for the Tag Team Championship. On December 27th’s show, the Wyatt Family has to defend their title against The Usos, American Alpha, and Heath Slater and Rhyno in a Four Corners Elimination match. Although The Hype Bros. earned a shot at the title a few weeks ago, those plans had to be scrapped when Zack Ryder suffered a legitimate injury in the ring which will take him out of action for several months.

And in the women’s division, the feud between Alexa Bliss and Becky Lynch continues. Last week, Lynch pretended to be a mask-wearing jobber just to have a chance to beat up Alexa Bliss, who was furious about Lynch’s trickery. Tonight, Alexa Bliss will fight Becky Lynch once again, with the Women’s Championship belt on the line. Will Lynch be able to reclaim her belt? Or will Bliss be able to put an end to her once and for all?

What does that even mean? https://t.co/MHKJ57L6jb

We’ll find out tonight when SmackDown Live airs on the USA Network. 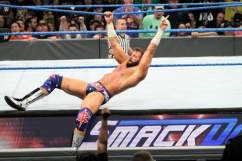 Zack Ryder Injury Update: When Will He Return to ‘SmackDown Live’?